The Last Show Of Glenn Frey With Eagles – Watch 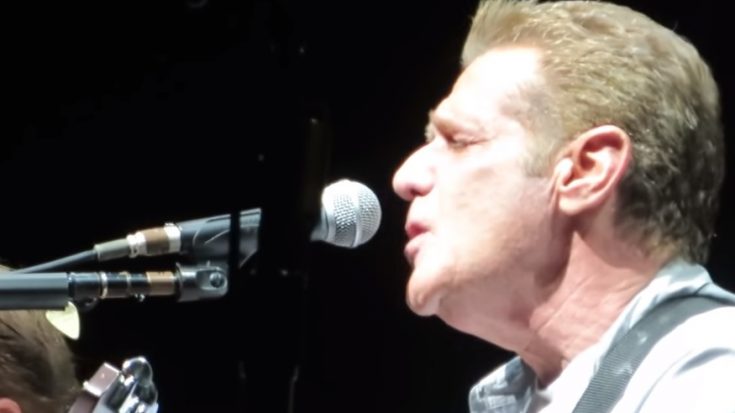 No one could ever have prepared Eagles fans what was to be founding member Glenn Frey’s final show with the band. This was during the 2-year History of the Eagles tour, where Frey played his final public appearance with the band on July 29, 2015, in Bossier City, Louisiana.

The tour started on July 6, 2013, in Louisville, Kentucky which had the band dish out tracks from their extensive run in the music scene, from when they were once a backing act to becoming the main attraction on stage. The Eagles’ reunion in the early ’90s churned out a single new album in the form of 2007’s Long Road out of Eden, in which the following tours were given the greatest hits treatment for the concert setlists. In History of The Eagles, however, the band dug through rare and early cuts from the first 20 years of their career.

This meant a new concert format, starting with Frey and Don Henley doing acoustic versions of early songs while the other members slowly join them as the show progressed. This was the usual affair, featuring a pair of encores and around 30 songs performed. The tour lasted over 140 dates and had stops in 12 countries, including their final show with Frey.

The founding Eagle passed away on January 18, 2016, after an extensive struggle against rheumatoid arthritis, pneumonia, and ulcerative colitis. “The guy played through pain for several years. He hid it very well. I could see it in his fingers. His rheumatoid arthritis made his fingers swollen and bent. It was difficult for him many years. But like an old football player, he would get himself taped up and go out there on the field and play the game, so he hid it very well. But he was very uncomfortable for a long time,” Henley said of Frey in a 2018 interview.

Henley knew that the band was destined to break up from the day they got together, but he didn’t anticipate how Frey would exit the scene the way things played out. “When that tour ended, we just thought we would take a two- or three-month break, then we would probably tour some more the following year. Then the tragedy happened in October. That’s really when Glenn fell ill. That’s when the pneumonia struck. So, you never know what’s going to happen in this life. It’s full of unexpected events,” he said.

The band supposedly called it quits after the 2016 Grammys, but went back on the road and brought in Frey’s son, Deacon, to stand in his place. “The only way it felt justified to me was to have family blood in the band. And I have to hand it to Deacon. He had done some gigs with his father – private parties, in front of maybe 200 people. To go from that to 50,000 people is extraordinary. I don’t know many people who could have done that without freaking out,” Henley shared in a 2017 Rolling Stone interview.

Henley cherishes Frey’s memories long after his departure, saying, “Glenn was the one who started it all. It will be very strange going forward in a world without him in it. But I will be grateful every day that he was in my life.”