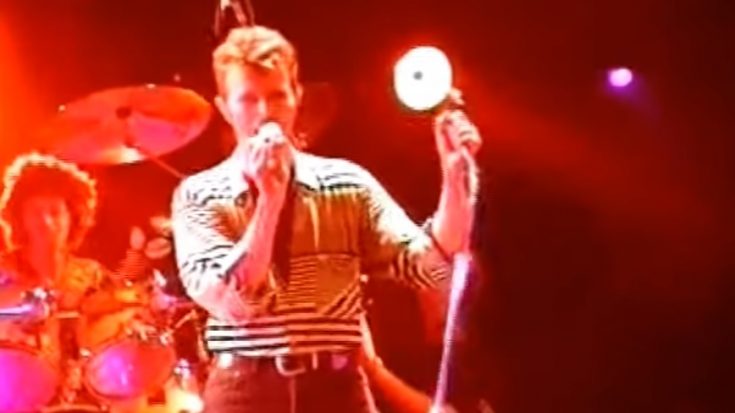 David Bowie’s newest archival live album, Ouvrez Le Chien, has hit live streaming platforms. This particular show was recorded at Starplex Amphitheater in Dallas, Texas, on October 13, 1995. The said show was a co-headlining stint with Nine Inch Nails where the two outfits performed 5 songs together – though this collection is limited to 15 songs that Bowie and his band performed after NIN frontman Trent Reznor left the stage, along with two bonus Birmingham performances later that year.

This was during a low point in Bowie’s popularity in America while NIN was on a roll due to the success of The Downward Spiral. Most of the fans came for NIN, but Reznor couldn’t sit right with the idea of his idol playing before him so the arrangement was such that NIN performed first with Bowie only coming out at the end of their set for duets on songs like “Hurt” and “Scary Monsters (And Super Creeps)”. As the songs progressed, members of NIN slowly left the stage and were replaced by members of Bowie’s band until only the Bowie outfit remained to perform their own set.

While Bowie and company definitely didn’t half-ass any of their sets, a lot of NIN fans walked out of the shows as soon as Reznor left the stage. “A lot of the audience knew [Bowie] because they knew Nirvana’s version of ‘The Man Who Sold the World’. I thought that was funny. We played pretty much all of the Outside record, which was pretty out there at the time. I wasn’t even sure I liked it myself at first,” says Bowie bassist Gail Ann Dorsey in a 2016 Rolling Stone interview.

Watch David Bowie and his band perform “Teenage Wildlife” from Scary Monsters (And Super Creeps) from one of these shows.