The Events Of AC/DC’s Invasion In The UK 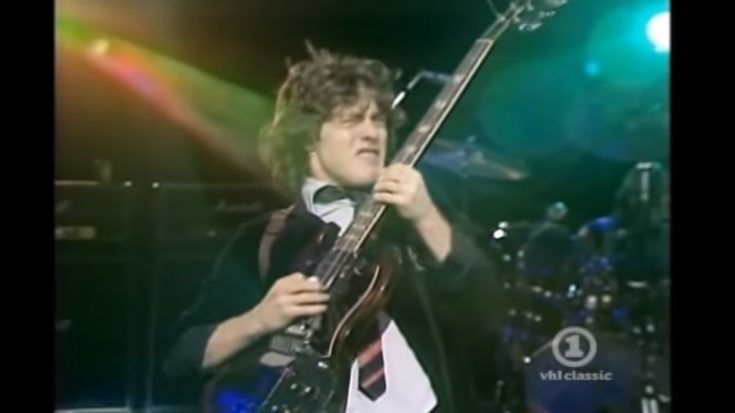 Aussie band AC/DC first set foot on London on April of 1976. Here are some of the events that transpired after the hard rock icons landed in UK.

Just as the band settled in London, frontman Bon Scott immediately sought refuge at a pub he used to frequent in back in the day. Just as Scott was about to get his brew, he was hit with a beer mug. An altercation soon followed that left the vocalist with a dislocated jaw and missing some teeth. Scott says he was just thrown in the fight, and wasn’t his doing, to begin with. The band is set back some $2,000 to pay for Scott’s injuries and get his teeth fixed.

The band was stagnant for a few weeks until they finally made their UK debut at a Hammersmith pub known as the Red Cow, which was a stone’s throw away from their home at Bayswater. AC/DC was brought in to play two sets for a measly £35, but they obliged. An account from Malcolm Dome from the night of the gig says: “The Red Cow was an unpretentious West London boozer-cum-venue, with a reputation for supporting young bands. The action took place at the back of the pub, in a sweatbox of a room with an official capacity of 250 and toilets that were in a constant state of disarray due to a stream of people clambering in through the windows to avoid paying to get in.”

As they started their set at the Red Cow, it was bare, you could count the audience and still have time to think over if you’d really want to go on performing. But AC/DC were no naysayers and performed a stellar set as if they were on a big stadium, Angus Young even doing his stage antics to great effect. As the band went on to their break before the second set, the audience dwindled as they went out the pub. AC/DC was confused as to whom they would be playing for with almost all the people gone.

Turns out, those people were phoning their buddies to come down the Red Cow to witness this scorching “new” faces in town. As they started their second set, the pub was slowly being filled with people, to the band’s surprise. Angus goes on again with his sick moves, and after the show ends, the band’s UK booking agent Richard Griffiths comes up to them and says, “That was the loudest, meanest thing I’ve ever heard in my life.”

Bassist Mark Evans also had a peculiar encounter after a gig, that was when he met a fellow Aussie who posed as him. The other guy says, “Did you know AC/DC play around here? We’re doing some gigs—my name’s Mark Evans.” Evans replied, “That’s quite a coincidence. My name is Mark Evans, and I play bass in AC/DC.” The other guy laughs and says the line works like a charm with women there, to which Evans retorted with, “You just did it to the wrong guy, mate.”

The band went on to play another gig at the Sighthill Campus of Edinburgh. While the school’s student union can only offer up to £15 for bands, but upon hearing AC/DC’s Aussie records, bumped it up to £50.

The band scores a gig at the Nashville Rooms of London, which was a punk venue most of the time. AC/DC blow up the house again, with Caroline Coon sharing her thoughts on the juvenile rockers’ performance that night. “In essence, AC/DC are nothing new. The legs-astride, uncompromisingly male stance of Malcolm Young (rhythm guitar), Phillip Rudd (drums), and Mark Evans (bass), their faded denims and sweat-soaked T-shirts, are a familiar sight in the rock’n’roll arena. … What, though, makes them a band to be seen and heard, are the extraordinary, virtuoso antics of the lead guitarist, sixteen-year-old [sic] Angus Young. The rest of the band are fine foils for him as he gives a not-seen-since-Quasimodo-did-a-dive-and-RichardNeville-left-the-Old-Bailey performance of a doubled-up school kid in the throes of an ecstatic mutation with his guitar. (He wears the appropriate flannel drag and satchel),” Coon wrote.