The 10 Best Riffs From Def Leppard 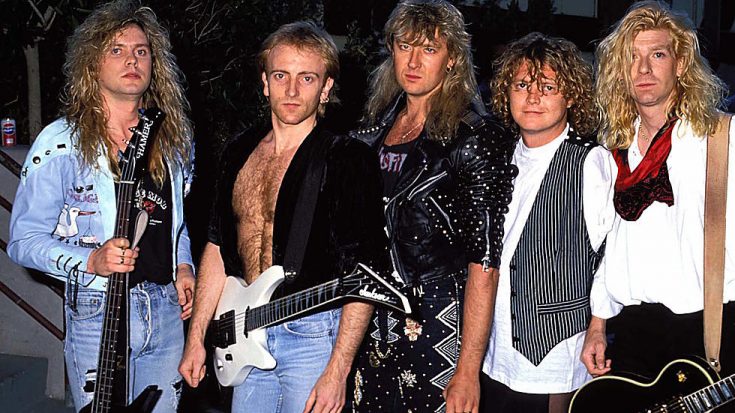 Undisputedly one of the top rock bands from the 80’s, Def Leppard hasn’t ceased to serve fans with their best tracks up to the present. One of the few bands who endured time with their persistence and quality, Def Leppard became a household name for British metal fanatics. The iconic rugged, tough-guy aura these guys exuded helped a lot in solidifying their status as one of rock’s baddest boys.

Along with their popularity, were the songs laden with signature riffs from each of the band’s talented guitarists. Here are some of the most powered-up, catchy riffs from Def Leppard.

The chaotic riff that concluded to become a hard-rocking, uplifting progression. Coupled with the catchy chorus that went round and round, the song is a heavy mix of layered riffs and vocals to match. Truly a mix-mastered audio masterpiece wrapped in the guise of rock.

The heavy droning of guitars in the intro paves way for a feel-good riff that is a mix of light and heavy notes sure to make the crowd head-bop. The verse progressions are amazing as well, utilizing major chords that ensures a good time for the listener. The solo at the bridge is a class act of guitar showmanship, nothing but authentic rock feels here.

A classic approach with an opening riff before the drums set in, this is another homage to Def Leppard’s tested and true formula. Multi-layered vocals provide a wave for progressions to ride on, while a definite guitar wail that proceeds to a metallic solo, then allows a brutal shred at the end for good measure. How Def Leppard does it is magical, riding high on that fretboard concoction like nothing else.

The album’s title track has a four chord progression that’s reminiscent of late-night drive mixtapes, the night wind rushing through your hair with heavy sustained notes underlying it. Probably a precursor to synthwave inspirations, Def Leppard paved the way for this aesthetic and quality with simple yet tugging riffs that have a certain hypnotizing quality to it.

Starting with a bluesy riff that’s a tad bit too familiar (cough, Led Zeppelin, cough), this brooding track injects fun into the equation with a vocal line that’s sure to work well with the backing vocals. A rich, still blues solo then emerges from the riot, with a quick beat calisthenic that compliments it quite well. The bright, verse progressions is another feel-good trademark by Def Leppard.

One of the heavier sounding tracks of Def Leppard, the mystifying progression makes it way into an electrified verse riff that brings out the tonal quality of the song. A classic, three-stroke riff for the chorus is a good take to provide a lighter counterpart to the overall sound. A lovely droning riff that is complimented by a blues lick is a tasteful addition to the track’s feel.

The somewhat nonsensical German intro opens up into the intense vocal and guitar conversation, only to be tied together by the consistent bassline. Capturing the power of the 80’s metal sound, the heavily distorted quality graces the bridge with poignant yet powerful riffs. Nothing oozes machismo like this track.

The ominous and mysterious opening riff gives way to the powerful vocals of the verses and chorus, contrasting each other quite well. The bridge and outro riffs are somewhat mystical on its own, but when paired with the drum’s booming cadence makes up for one of the heaviest hitting combinations of Def Leppard.

This melancholic heavy rocker starts with a bright solo that carries a deep feeling, along with a plucked progression that says lonely all over it. The introduction into the bridge is a profound moment with vocals and guitars screaming out to each other in succession. The classic twang that exudes sadness with the riff is only rivaled by the ending, a muddled wailing progression that ends in a descending drone.

The classic progression in the verse is monumental in Def Leppard’s most famous song. Introductory riff screams bad boy all over the track, and the sense of freedom in the track is evident with the alternating vocals and guitars. The angsty riffs and progressions of the track is a dead ringer for the 80’s signature badass culture. Ending the track is a classic yet effective move with the thumping of drums and heavy chords. This track’s sure to get you hot and sticky sweet.