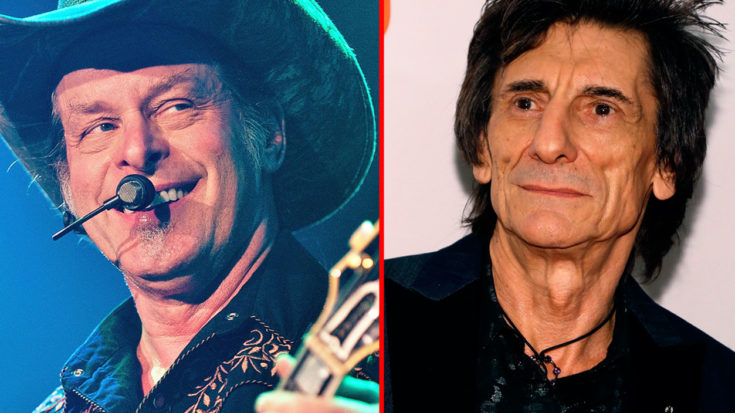 As crazy and out of control as the world may seem, we can always count on Ted Nugent to be…well, Ted Nugent. The 69-year-old “Stranglehold” rocker took to social media over the holiday weekend, offering up opinions on a variety of topics ranging from his favorite homemade recipes to “Jingle Bells,” but it was his plea to fans to stay away from drugs that earned Nugent headlines.

Noting that he’s “almost 70” and doesn’t “look like someone threw me in a wood chipper!”, Nugent took a shot at Rolling Stones guitarist Ronnie Wood after posting the link to a Daily Mail article about Wood’s romantic holiday outing with his wife, admonishing fans to treat their bodies and lives with respect and reverence by staying away from the “lifetime of drugs and alcohol and tobacco” that famously plagued the 70-year-old rocker throughout the years.

Hmmmmmm…. I'm almost 70 and I don't look like someone threw me in a wood chipper! Couldn't be a lifetime of drugs and…

“Hmmmmmm…. I’m almost 70 and I don’t look like someone threw me in a wood chipper! Couldn’t be a lifetime of drugs and alcohol and tobacco could it. Treat your sacred temple & gift of life with reverence,” wrote Nugent on Facebook.

Nugent’s fans responded to his parting shot at Ronnie Wood, some in agreement while others took him to task for what they felt was an unnecessary attack:


Ted hasn’t offered any further regarding his comments about Ronnie Wood, but something tells us that when he does, it definitely won’t be boring.