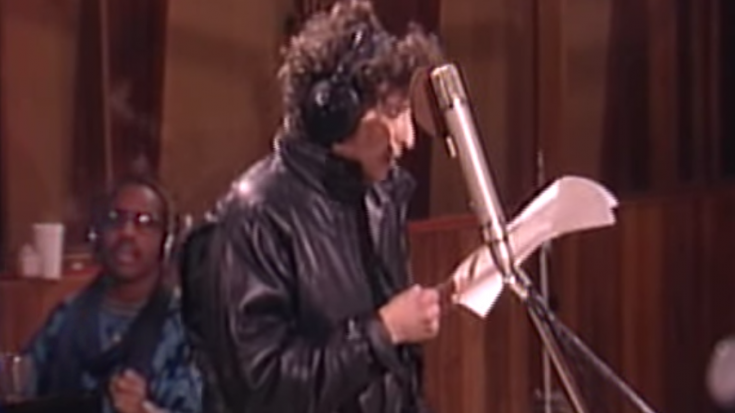 We Are The World

Quincy Jones, Stevie Wonder, Michael Jackson, and Lionel Richie wrote the record breaking “We Are The World,” in 1985. The charity song was a group effort and released under a band of 45 mega artists called, United Support of Artists for Africa. Bob Dylan was one of the mega stars, and one of the most established icons of the large bunch.

His vocals were also recorded separately before he joined the other singers. He rehearsed with producer Quincy Jones, Stevie Wonder, and Lionel Richie in the studio prior to the official taping of “We Are The World’s”  music video.

Please Check Your Egos At The Door

It’s a legendary fact that Quincy Jones had tacked a sign to the studio’s door prior to the studio sessions. With so many iconic musicians about to enter one room, he had put up a paper that said “Please Check Your Egos At The Door.” And that is exactly what Bob Dylan did. He began to record his vocals. The man is obviously shy and anxious, even embarrassed. Poor Bob!

Bob is struggling so much to reach a comfort level with his vocals. His pals, Lionel Richie, Stevie Wonder and Quincy Jones, offer a little support.

“Can you do it one more time, Steve?” asks Dylan nervously.

Bob can not seem to get the lyrics down. He walks over to the piano where Stevie is playing. And the iconic pianist improvises a line for Dylan on the spot, all while playing the keys flawlessly. This seems to help Bob feel more at ease. He returns to the mic.  Lionel Richie looks over the sheet music with Bob Dylan- confirming every note. Quincy keeps reminding Bob “that’s beautiful, that’s nice man!”

“Oh, that’s not any good,” repeats Dylan each time he breaks up a lyric.

At the end of the rehearsal the artists join together for a group hug and you can’t help but to admire the humility and musicianship between them!