Brian Johnson Is Back In AC/DC 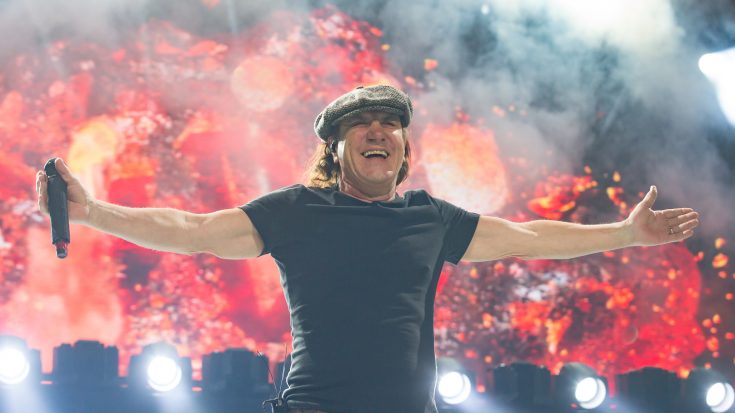 It has just been recently reported that Brian Johnson is back in AC/DC for a new record. The first reports come from the Brazilian AC/DC fan website acdcbrasil.net confirming that Brian said of a new studio album,

In 2018, Johnson was spotted with drummer Phil Rudd and guitarists Angus Young and Stevie Young outside Warehouse Studios in Vancouver. The pictures of the band together again circulated and sparked rumors of a reunion record.

It’s been said that this new AC/DC record will also include guitar parts and songs written and recorded by the late Malcolm Young before his death.

Some online reports speculated as well that Angus Young will dedicate the new AC/DC album to his late brother.

“We ran into Brian Johnson from AC/DC at the airport today after the flight home and we asked him about the rumors of him being on the new AC/DC album and he said ‘yes’ and that he is ‘sick of denying it.’ So that was a cool surprise ending to the tour.”

The last time AC/DC played with this line-up and with Brian Johnson at the helm was 2014 on tour for the band’s album “Rock or Burst”.

Following the2014 tour came Malcolm Young’s forced retirement due to his deterioration caused by dementia and eventual death. The band also went through the departures of Johnson, Rudd and bassist Cliff Williams. Two years ago, Johnson was forced to leave AC/DC mid-tour due to a hearing loss. Guns N’ Roses frontman Axl Rose took over the vocalist duties for the band on the road during Johnson’s forced exit. During the end of that tour, Williams also decided to retire.

For the last year, it seemed like the band has been writing and recording with Johnson, and now that he has confirmed a new record is in the works and fans are clamoring for it,