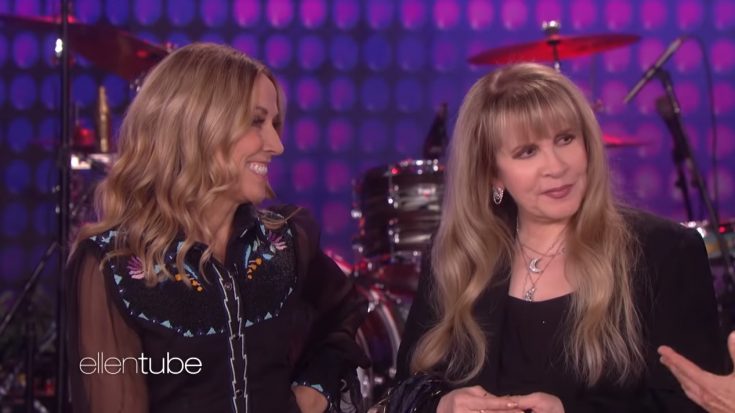 Country sensation Sheryl Crow had just released her eleventh (and final) studio album last August. Titled Threads, the album saw the collaboration of Crow with her industry colleagues, like Willie Nelson, Brandi Carlile, and St. Vincent, among others. Just this week, Crow was a guest on The Ellen Degeneres Show, performing a number from the catalog, “Prove You Wrong”. Crow was joined by a special guest, Fleetwood Mac vocalist, Stevie Nicks, supporting her vocals and playing the tambourine as well.

After the performance, Ellen greeted Nicks for her achievement of being the first woman artist to be nominated in the Rock & Roll Hall of Fame twice, by being a member of Fleetwood Mac, and her stint as a solo artist. Ellen then turned to Crow to ask how she came to the decision of making Threads her last album.

Crow responded with: “I’ve grown up with records, I pored over Rumours and Fleetwood Mac as well as James Taylor and Carole King. These were the records that made me want to do what I’m doing. But people don’t listen to records anymore. You can go in and spend a ton of money and spend your whole life making a full story, and then people just cherry-pick and playlists — which is not a bad thing, but I now love the idea of just putting out music if I have something to say. And don’t we all have something to say right now?”

Sheryl Crow was also present for this year’s CMA Awards and performed her rendition of Janis Joplin’s “Me and Bobby McGee”, joined by Dierks Bentley in honor of Kris Kristoferson.