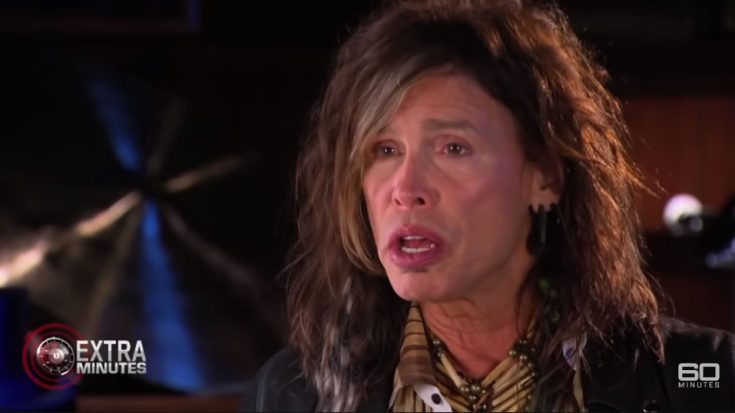 Aerosmith’s iconic frontman Steven Tyler has a lot of tricks up his sleeve. One of it is his eccentric sense of humor. Outrageous outfits, crazy stage antics and whatnot, Tyler knows how to tickle the funny bone. The band is currently on a break from their Las Vegas residency, as they have just concluded the first leg of the extensive 2019 string of shows.

Tyler is known for being very active on his social media accounts, especially Twitter and Instagram. In sync with the millennial crowd, Tyler frequently posts his hilarious pictures with even more hilarious captions that’s sure to have you in stitches. In one recent post on his Twitter account, Tyler plays with his mic stand, with a comic innuendo for a caption.

I KNOW WHAT YOU ARE THINKING- IS THAT A BIG MIC STAND OR AM I JUST EXCITED TO SEE YOU- THE ANSWER IS BOTH!!!! 📷@KatBenzova pic.twitter.com/mU4UPcKxe1

In another Twitter post, Tyler shows off his adrenaline-junkie side as he boards the cockpit of a F-104 fighter jet. The 71 year-old rocker sure knows how to enjoy himself.

#FLASHBACKFRIDAY #SPACEDAY AERO FORCE ONE HAS BEEN UPGRADED TO THE F-104! SEE YOU ON MARS! FASTER THAN A SPEEDING BULLET AIN'T GOT NOTHING ON US! 🎥 @caseyshoots pic.twitter.com/qVHXTbrbVY

But his latest hilarious post, now on Instagram, is quite a sight to behold. Tyler is seen taking, or pretending to be, taking a dump on a deserted street, beside a garbage bin. What’s even more funny is he’s sitting on an actual toilet. Whether deliberately placed or a moment of serendipity, Tyler used the scenery to its fullest potential. Tyler captioned it with “’I’M SHITTIN’ PRETTY @Ryanseacrest … BUT I REALLY NEED TO WIN YOUR RADIO (( TO PAY MY BILLS FOR A YEAR )) CONTEST BRO 🙏 📷@zack.whitford”

Tagging renowned radio personality and TV host Ryan Seacrest, the post’s context refers to KIIS FM’s running contest with Ryan Seacrest paying your bills if you ever win. Tyler takes this moment to jokingly present himself as a worthy winner of the on-air lottery. Ryan Seacrest replied to the post, “Hopefully you’re ok with being the runner-up because unfortunately it appears you’re finishing number 2.” It seems that Steven Tyler has met his match.

Aerosmith will be continuing their Las Vegas Deuces Are Wild residency will resume for the second leg, on the 19th of June. Check out one of their performances from the first leg of the show!