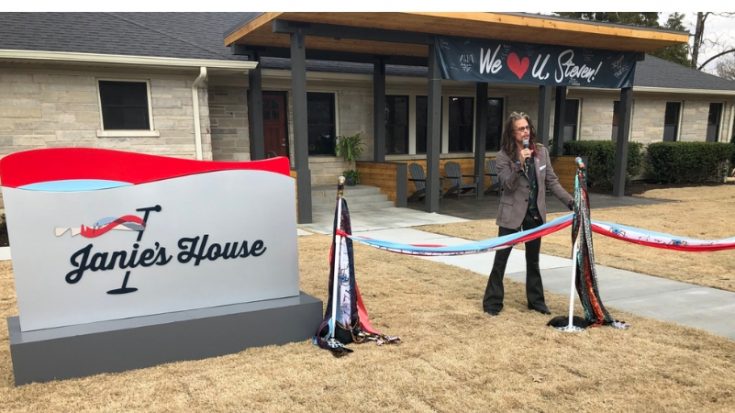 Aerosmith’s frontman, Steven Tyler, has continued the ongoing journey of helping survivors of physical and emotional abuse. Since it’s start in 2015, Janie’s Fund has raised more than $4.5 million dollars to aid women and girls who are trying to re-build their lives.

After talking with many women recovering from traumatic experiences, Steven Tyler was inspired to take action. He wrote and released “Janie’s Got A Gun” in 1989, about a severely abused girl. His fight to bring awareness to the subject didn’t stop there. Now, he has donated $500,000 to renovate an 82-acre home in Memphis, Tennesee- Janie’s House.

Janie’s House is settled at the Youth Villages Bartlett Campus and will be a safe haven for those in need of support through Janies Fund. The focus is to help 14 girls at a time, 26 to 30 girls annually, and give more than just tlc- for as long as possible. The house is the second center to open under Janie’s Fund. The first home opened in Atlanta last year and a third is planned to open in Las Vegas later in 2019.

Steven Tyler attended the “scarf-cuting” of Janie’s House on February 04. He opened up about his inspirations and gave a positive message about the need to bring more awareness to those suffering from abuse. The singer is a wonderful testament of using your powers for good.

In a statement for Janie’s Fund Tyler stated, “What we accomplished  was only the beginning and we will continue to spread the love and the word! It’s so clear just by looking into the smiling faces and witnessing the spirit that surrounds this community that we’ve made an impact on the lives of these girls…there’s no way we can stop now,”