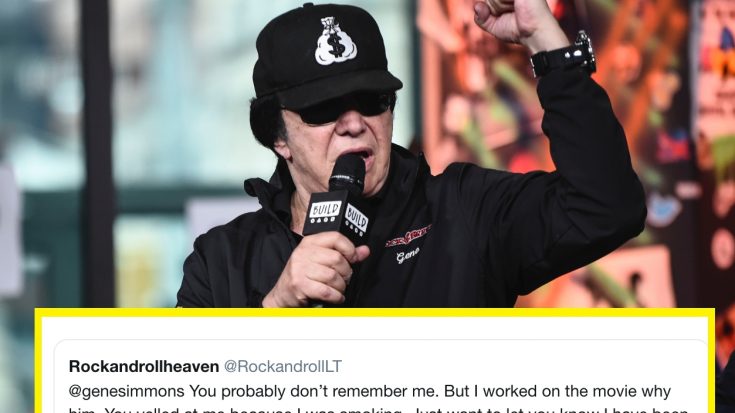 Whether you love him or hate him, KISS bassist and co-founder Gene Simmons is no doubt one of the most successful musicians and businessmen in the world. As a kid who escaped Nazi Germany at a young age with his mother to creating one of the most iconic and recognizable rock bands in existence, Gene is the personification of the American dream.

Gene is also the type of person to say whatever is on his mind, no matter the occasion and no matter who’s listening, which is usually everyone. It’s gotten him praise and it’s also gotten him in trouble, but he’ll do it nonetheless. But as it turns out, it may have actually saved a fan’s life.

It’s no secret that Gene is an advocate for people living a straight edge lifestyle. As soon as Gene spotted someone smoking, he did what he thought was necessary and yelled at the guy. Now I’ve personally never seen a video of Gene yelling at anybody, but I can only imagine that it was a frightening experience for him.

As it turns out, this gentleman hasn’t smoked ever since and the whole ordeal may have unexpectedly saved his life. So well done, Gene!

It’s not everyday you hear a story about how you end saving someone’s life, but who knows, it may just be the norm for Gene.

KISS are currently on a worldwide farewell tour titled ‘End Of The Road’ and they are hitting just about every single major city in the U.S. and other parts of the world, so if you’re free, DEFINITELY go and check them out because you’re not gonna wanna miss them!