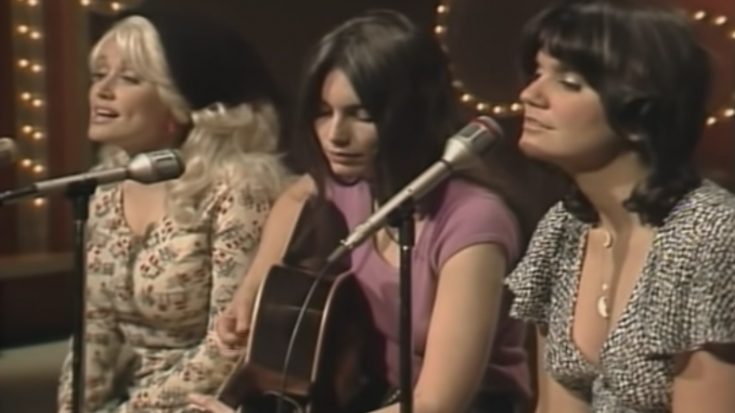 Ever wondered how three of the most iconic women in the music industry – Dolly Parton, Linda Ronstadt, and Emmylou Harris – all came together to create a seminal collaboration country album? The three artists were already longtime friends before they even worked together, not to mention each being fans of the other and their body of work.

While it wasn’t hard to have them work together, getting them in one place at the same time due to conflicting schedules and the fact that they worked for completely different recording labels. The ladies eventually got over some of these challenges and released Trio, which showcased their wonderful friendship and immense talent in a single record.

In Ronstadt’s documentary titled The Sound of My Voice, she recalled receiving a message from Harris, saying: “Emmy called me up and said, ‘Dolly Parton’s at my house, you have to come over. I was living, like, 40 minutes away. I got there in 20 minutes.”

“They had this big, ol’ house, almost like a bunch of hippies just livin’ up there. It was just a free-for-all kind of house. A dream for musicians,” Parton continued. She also recalled the time when the three of them were asked to sing something and she came up with the traditional “Bury Me Beneath The Willow”, while Harris and Ronstadt joined her by backing her vocals with their harmonies.

The trio has also been to Parton’s own television show, Dolly, where they performed their own rendition of The Sweetest Gift.