Relive The Time Jimmy Page Performed With the Black Crowes 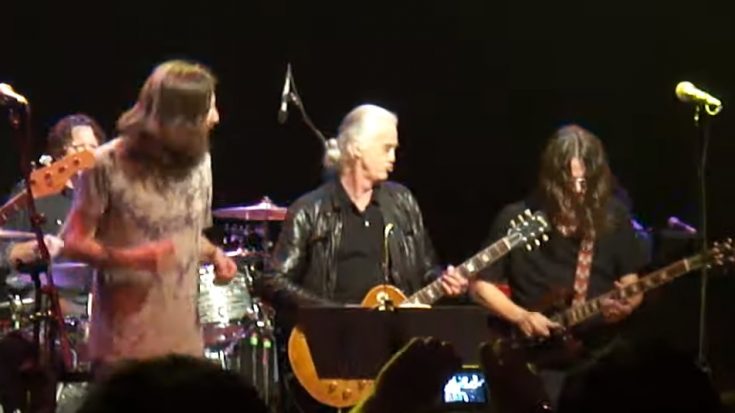 Jimmy Page and The Black Crowes live in 2011 - brenotube / Youtube

Guitar meister Jimmy Page and veteran rock act Black Crowes joined forces on a significant string of dates in 1999 that resulted in the release of the Live at the Greek: Excess All Areas, a live album that saw the light of day on February 29, 2020. But this wasn’t the first time that the two rock icons got together, as Page joined them in 1995 for the Amorica or Bust Tour to perform on two numbers, “Shake Your Moneymaker”, and “Mellow Down Easy”.

In June 1999, Page was heading charity movements as he had just broken off from performances with fellow Zephead Robert Plant, who wanted to focus on his solo career. Page was on the search for a temporary alliance with a band during that time, which to his luck, the Black Crowes were slated to play with Aerosmith and Lenny Kravitz in the same week. After a mutual friend, Ross Halfin, rang up the Crowes’ management, the deal was struck.

“When the request came through our friend Ross, we were amazingly flattered, to say the least. All people ever see is the Stones’ influence in our music. But Zeppelin has been a huge influence on us for our whole career. They’re definitely up there as one of the major reasons why we’re in a band,” said Rich Robinson.

As mentioned earlier, Page was still getting the itch in making music, but Plant was already disinterested in being a rock frontman. The Crowes were in a tight spot themselves, with their album By Your Side given the cold shoulder by their label in terms of promotion efforts. Working together with Page was the only logical solution to keep their head above water, without actually being treated as a burden.

So the newly-established unit booked six US shows, carrying a mix of blues-rock tracks from Led Zeppelin and the Crowes’ own material, magically given a unique twist with the lineup’s contrasting talents. The only thing left to do was cover the shows for a future live album release, which Page didn’t want to do initially, as he feared caving into the pressure that came along with it. They were able to convince him after some degree of coaxing, by agreeing that the recording team would be in a mobile truck outside the venue, and the Crowes would shoulder the cost. Page would retain the rights to the material, however, and if he deemed that it wasn’t good enough to package for the public, the recordings would remain unreleased.

The live album was comprised of the October 18 and 19 dates, but Page had a considerably bad night during the former, explaining why the album contained the majority of the second night’s set, where everyone was at peak performance level. “I wish I could have been in the audience. Because I know how good it was up onstage,” Page said.