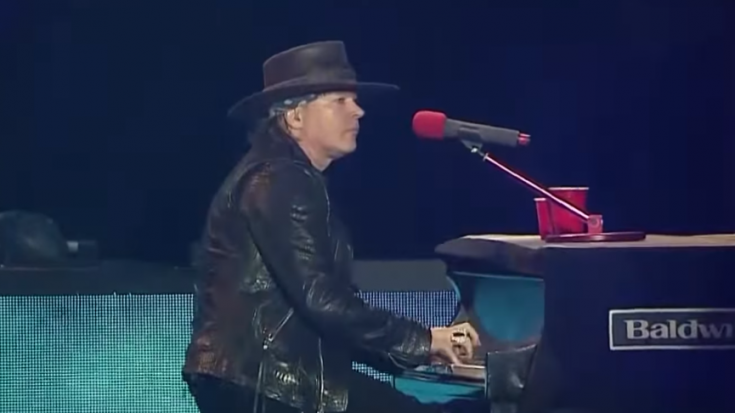 There’s no good song that Guns N’ Roses couldn’t create with a better version. Over the years of their career, they’ve managed to perfect the art of cover songs that became massive success starting from the classic hits of Elvis Presley, Wings, and many more. Let’s take a look at some of them below.

This piano ballad got its own spin when Axl Rose performed the song in their back-to-back Buenos Aires shows in 1992. It’s the opening for the band’s “November Rain.”

Another version that was born out of a popular Aerosmith version is this Tiny Bradshaw classic, “Train Kept A-Rollin”. Just when you thought things couldn’t be better: Joe Perry and Steven Tyler are also present to perform this mighty gem.

“Tie Your Mother Down” – Queen

Brian May’s surprising arrival on-stage with the group became more iconic when they began to perform “Tie Your Mother Down.” Slash and May’s guitar riffs are electrifying to hear.

Everyone loves a good Stones song, and Guns N’ Roses are here to fill get you your satisfaction. This one classy rendition of “Honky Tonk Women” happened during their Use Your Illusion tour.

Ever since the beginning, Guns N’ Roses were already fans of this AC/DC classic that it remained from their concert staple as early as 1985. And why wouldn’t they? This hit could easily pass on as theirs.

Before GNR took the phenomenal Skid Row on a headline tour for Use Your Illusion, as well as Metallica, they already shared the stage back in 1990 for a concert commemorating the RIP Magazine. Renaming the group as “GAK,” they performed the 6-song set with so much raucous, namely, Axl Rose’s “Piece of Me” cover.

This classic hit remake doesn’t exactly resemble the king’s old one, but GNR made sure that its impact is just as big as it was before. The song came from the group’s Appetite For Destruction deluxe reissue.

“Salt of the Earth” – The Rolling Stones

The joint performance of the Stones and Axl Rose + Izzy Stradlin took the problems of Guns N’ Roses on the verge of breaking up. Rose and Mick Jagger trade lines that will remain iconic for the rest of eternity.

It’s not a real collaborative show if Brian May wouldn’t play this one with Guns N’ Roses at the 1992 Webley Stadium concert. The interaction between the audience and artists is remarkable.

This tribute to the group’s favorite band, “Jumpin’ Jack Flash” by the Rolling Stones proved to be why Guns N’ Roses could rock on a syncopated beat. The grainy footage belongs to their 1986 shows.