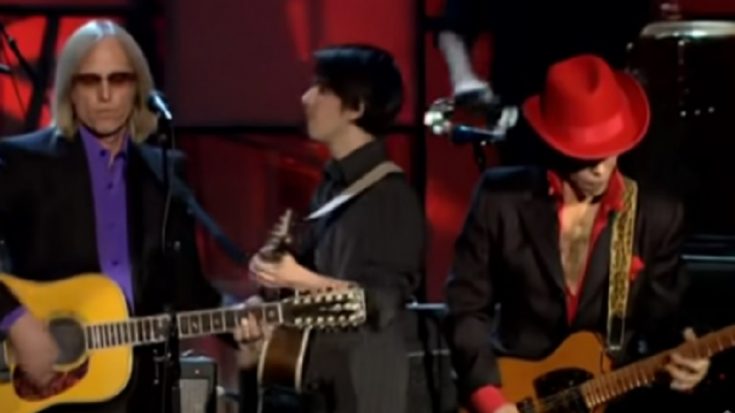 If you come across a debate on who had the most incredible performance given inside the Rock and Roll Hall of Fame, it will be a mistake not to discuss the iconic rendition of George Harrison’s “While My Guitar Gently Sweeps” at the 2004 RRHF event. All of the highlights of the night were made possible with Tom Petty, Jeff Lynne, Steve Winwood, and Prince in mind.

When former Beatle George Harrison was posthumously inducted inside into RRHF, it was only a matter of time; he had earned a great amount of respect when he ventured on as a soloist in the later years of his career. While he had already been inducted as a member of The Beatles, it was also a big deal for his family to have him recognized for his solo efforts apart from the Fab Four.

In that sense, it was only fair to assemble the finest musicians to commemorate the late singer. Prince, Tom Petty, Jeff Lynne, Steve Winwood, and George’s son Dhani Harrison were present to sing the classic “While My Guitar Gently Weeps.” You thought it would just be an amazing performance, letting these musicians share the stage with each other, yet, there are no words to describe what would eventually happen in the minutes to come.

Prince, also an inductee for the RRFH, agreed to play the lead guitar on the song. Petty and Lynne shared vocal duties and we can also see Dhani singing from the back. But it was with Prince’s guitar solo that the world stopped spinning for almost 3 minutes. He understood the assignment justly well; he boomed the stage with his magnificent riffs that were swept neatly and convincing. Dhani’s smile proved that he got lucky celebrating the legacy of his father on-stage with this incredible performer who played the lead as if he was loading a shotgun using his fingers, ready to shoot.

Without a doubt, it is and will remain, one of the greatest musical moments in the name of Rock and Roll. You can watch the full clip below.