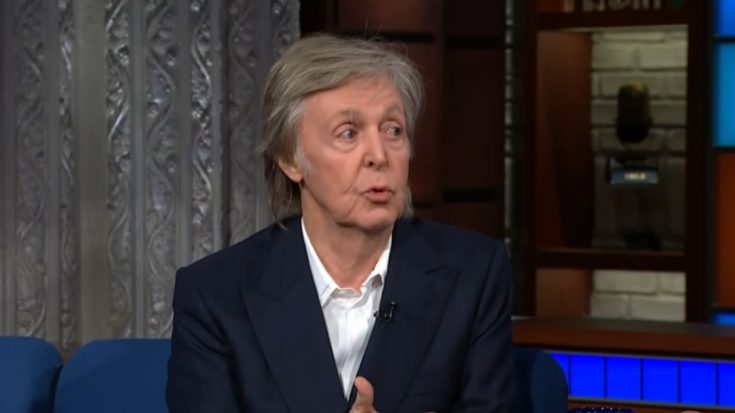 Paul McCartney on The Late Show with Stephen Colbert / Youtube

It’s rare to find an opportunity to meet your longtime idol. So, when Austin Butler got the chance to meet the one and only Paul McCartney, he knew he’d have to find all the means just to go and see him.

During a recent appearance on James Corden’s The Late Late Show, the actor recalled the day he met Paul McCartney and the astonishing story the former Beatle told him about Elvis Presley. Butler and Paul’s daughter, Stella became friends when the actor previously went to London. Then, when Stella heard that Butler was also in Paris for the fashion week, she phoned him and ask if he could come to her show at 11 am.

He did everything he could to transfer trains, but find it impossible to do so. He once again called Stella and apologized. However, knowing the number of strings Paul could pull off, Stella replied, “Let me see what my dad can do.” A few minutes later, the deal was made, and Butler and the McCartneys agreed to be on the same train; the young actor couldn’t believe it.

After the two became acquainted, the attention then turns to Elvis Presley, the man whom Austin is playing in the movie Elvis. When Austin questioned about Elvis, Paul recounted the day he visited the King at his Beverly Hills home.

Although Butler had heard this anecdote before, McCartney’s telling was different because he included an unexpected detail. While Paul was on this euphoric trip down memory lane, astonished by such a realistic picture of one of the all-time greats, Butler was blissfully unaware that the Charlie Rich classic “Mohair Sand” was playing in the background on Elvis’s jukebox. Butler hasn’t heard the song before, so Stella quickly grabbed her phone and searched the song. Then, as McCartney and Butler enjoyed a time together, they listened to the same music that the musician had listened to with Elvis all those years earlier.