Paul McCartney, Prince, And Jim Morrison Items Up For Auction 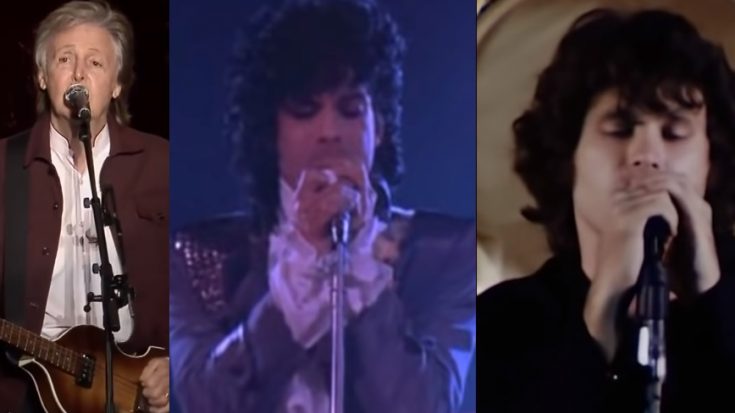 Historical pieces and items from legendary rockers like Jim Morrison, Paul McCartney, and Prince have been offered up for auction. This auction is comprised of McCartney’s handwritten lyrics of the Beatles’ song “Maxwell’s Silver Hammer”, Jim Morrison’s journal, and Prince’s “Blue Cloud” guitar, being the main pieces of the 2020 Music Icons series at Julien’s Auctions.

The handwritten lyrics of “Maxwell’s Silver Hammer” sport 20 lines of the song and is written on Apple Corps Limited, 3 Saville Row Stationery. The lyrics – which have deleted lines and edits – is estimated to fetch a price of $200,000 to $300,000.

Jim Morrison’s Paris Journal is filled with poems – which he wrote in rapid succession before his death in 1971 – is up for grabs. This isn’t the only Morrison item on the list, though, as a handwritten poem, “Ode to L.A. While Thinking of Brian Jones”, will also be up for sale, along with a photograph of the Doors frontman with a snake in his hair.

Prince’s 1984 custom “Blue Cloud” guitar doesn’t have strings on it but will come in a purple guitar case and a Paisley Park printout which lists all the “Blue Cloud” guitars ever made, this particular model being the first, original one. The guitar also sports Prince’s love symbols on its neck – and will go for around $100,000 yo $200,000. Other Prince memorabilia include a two-piece purple suit from the late ’90s, his love symbol belt buckle,  a 14-Karat white gold pendant, and wedding china, among others.

The auction will take place from June 19 to 20 in Beverly Hills, Califonia, along with a live online event. President and CEO of Julien’s Auction, Darren Julien, said in a statement, “This year’s edition of Music Icons offers an unsurpassed collection of over 700 music items to our thriving international market with something for every music lover and serious collector. Julien’s Auctions is proud to present these important artifacts, all of which occupy an unparalleled place in music history and pop culture.”