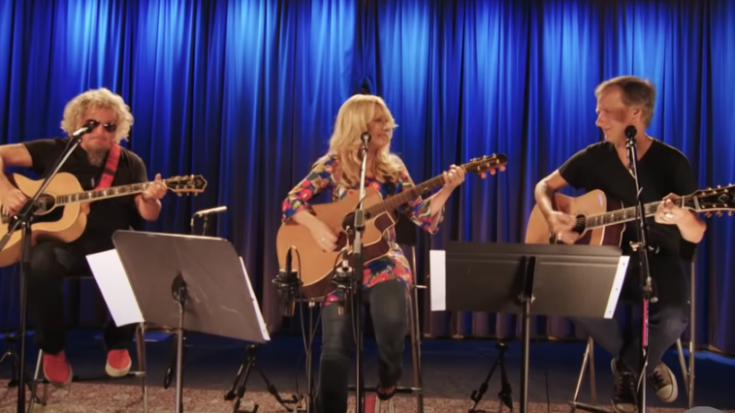 Sammy Hagar is in for a heartfelt performance of “Brother” together with Alice in Chains Jerry Cantrell and Heart’s Nancy Wilson.

“Rock and Roll Road Trip with Sammy Hagar” explores the ultimate backstage pass as the rocker delivers to us what it’s like to be backstage with some of the greatest musicians of all time. Every season, the red rocker brings his viewers to different adventures full of laughs, heartfelt stories, and of course, good music.

During the show’s first season in 2016, Hagar introduced us to an intimate jamming session and interview from Alice in Chains’ guitarist and singer Jerry Cantrell and Nancy Wilson from Heart. The session first explored the beauty inside the Grammy Museum at L.A. Live, and first featured REO Speedwagon’s frontman, Kevin Cronin. Later at the Clive Davis Theater, the two joined the blonde musician and they began to share their personal stories as well as performed songs that were never officially released by them.

Inside the performance was a heartfelt rendition to Cantrell’s “Brother,” a song whom the latter dedicated for his younger brother to bridge the gap between their relationship. Cantrell said before the performance: “There was a kind of a time where me and my brother weren’t getting along well,” he said. “So, my brother moved in with my dad in Oklahoma, and I didn’t see him for quite a long time. So, we were kind of separated.” The three musicians then began to strum their acoustic guitars and perform the tribute song, which was both exciting and incredible to hear.