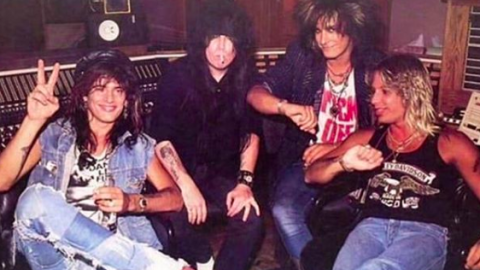 It’s been announced that there will be an upcoming film adaptation of the best-selling Mötley Crüe biography that will be called The Dirt: Confessions Of The World’s Most Notorious Rock Band based on the book written by author Neil Strauss. The film will be coming out on Netflix come March 22nd of this year. The real Mötley Crüe worked closely with this film project and even hit the studio to record new music for the soundtrack of the biopic. Recently Nikki Sixx held a Q&A session on Twitter and answered some brewing questions and shared exciting news about the upcoming soundtrack for The Dirt.

Sixx revealed that there will be a song that rapper Machine Gun Kelly, who portrayed drummer Tommy Lee in the film that will appear on the soundtrack. He said that the song is “coming really soon”. He also commented that the band’s new music for the film is “Heavy Crüe…”

Behind-the-scenes in-studio footage from the recording sessions have been released by the band.  The footage of the band recording new material  features their song “The Dirt” in the background.

Aside from “The Dirt”, the band will also include three other new songs in the sound track and they are called “Ride With The Devil”, “Crash And Burn” and “Like A Virgin.”

07. Piece of Your Action

Watch the behind-the-scenes footage below: