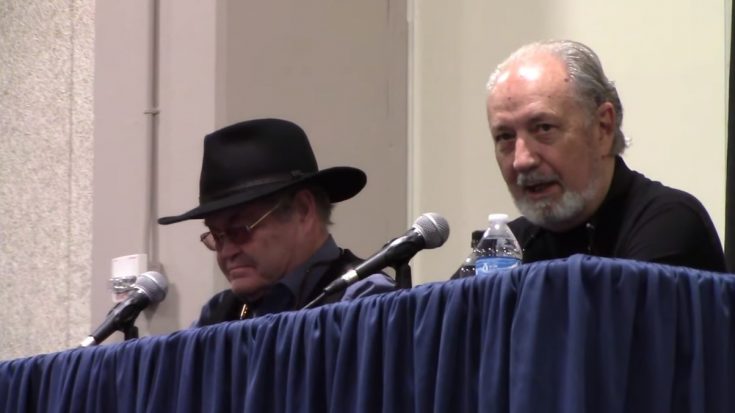 Micky Dolenz and Michael Nesmith of The Monkees - spsimmons / Youtube

In an interview with Rolling Stone magazine, Monkees guitarist Michael Nesmith recalls his exit from the Monkees back in 1973, when Peter Tork’s antics upon the recording of his song “Lady’s Baby” that left the band buried in a $200-300 thousand deficit that they had to pay off with their royalties. Luckily, record executive Lester Still owed Nesmith a considerable amount of money, with Nesmith striking a deal by saying “I’ll buy you out for whatever you owe on my royalties.” He was out of the contract and debt, but he lost his job as well.

In the present, Nesmith is back with his First National Band on the road,  and is slated to do another tour with the Monkees, or the remnants of the band, at least. When asked about his experience lately with the First National Band, Nesmith responded with, “It’s the best band I’ve played with, so that’s a start. It’s also people I love most in my professional history, so I love that. What better than to go out with a band of people you love to play music you love for people that love you? That sounds like a career.”

He was also asked about his feedback via a Facebook post about his time with the Monkees on their last tour, where he said rather discouraging things. Nesmith replied with, “No. But I have tried to take the advice of people that care about me that said, “Don’t be such a crank” or “Don’t be such an asshole.””

The Monkees are bound to do another tour this coming April, and when asked about his motivations for agreeing to another stint, Nesmith said, “There are no more Monkees, as you know. I’m going to go out with Mick and do the Mike and Micky duo. In that show, you get mostly Monkees hits. Mick will play some of his stuff and I’ll play some songs that people remember from me, but at the end of the day it’s a Monkees show. We have a good band that has it all worked out. They are all first call-session guys and Mick and I are in fine fiddle and fine form and fine voice and everything. So we’re having a good time and the audiences that come to have an evening of nostalgia and Monkees music played well have showed up at the right place at the right time.”

When asked about his current health status, Nesmith was rather positive despite what he had to go through recently, saying “I feel great. I feel a thousand percent. It’s really weird. It was shortly after the operation, about five months, and I was feeling the best I’d ever felt in my life. I could really breathe. Everything was really working. I felt like I’d gone through a car wash that fixed everything. I felt funny. People would say, “How are you feeling?” And I’d say, “Great!” I’d find myself stopping just before saying, “You really should have this done.” I thought, “What an untoward remark this would be to make towards a stranger.” But for me, payday, hot dog! Really good stuff.”