Michael J. Fox Makes Triumphant Return To The Stage To Perform “All Along The Watchtower” 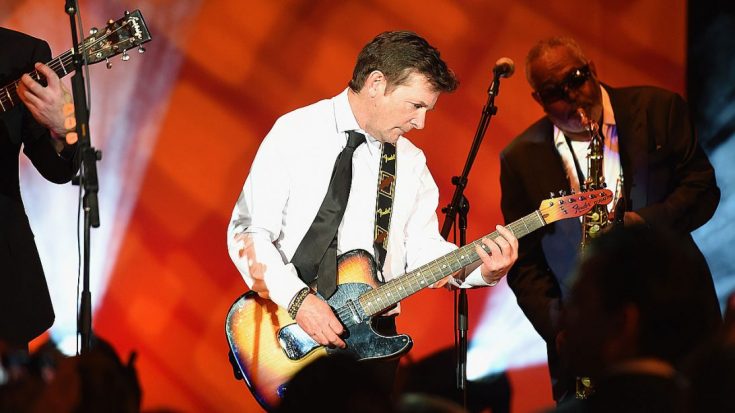 McFly Is Back And Better Than Ever!

Michael J. Fox is truly one of the most timeless actors of our generation. The actor most notable for his role as Marty McFly in the still mega popular ‘Back To The Future’ film series has been the face of an entire generation of film and music lovers. Aside from being an incredible actor, Michael J. Fox is also a phenomenal guitar player, as you may have seen in the first Back To The Future film.

Unfortunately, as of late, Michael J. Fox has been battling Parkinson’s disease and it has limited the acting legend. Well, it used to limit him, but not anymore! With the help of surgery and medication, both interventions managed to reduce the tremors.

“I was built to overcome. I was built to survive… And after it was alarming and freakish and scary and nightmarish, Parkinson’s was settling. I was able to accept the fact of it, accept the truth of it. But acceptance doesn’t mean resignation; it means accepting and then moving on.” – Michael J. Fox

He may have mimed the guitar playing in “Back to the Future” but this isn’t the first time he played the axe for real on stage. He has performed with other legendary rock acts like Joan Jett and The Who.

“We’re always afraid of stuff we don’t understand. People would look me in the eye and say, ‘how are you?’ and expect to see fear in my eyes and they just see their own fear reflected back at them. It didn’t make me angry, it made me feel kind of responsible.” – Michael J. Fox

What you’re about to watch is Michael J. Fox take the stage with a guitar in hand and join Dave Matthews for an awesome rendition of “All Along The Watchtower”. To put it simply, Michael J. Fox knocks it out of the park! Don’t believe me? See for yourself!