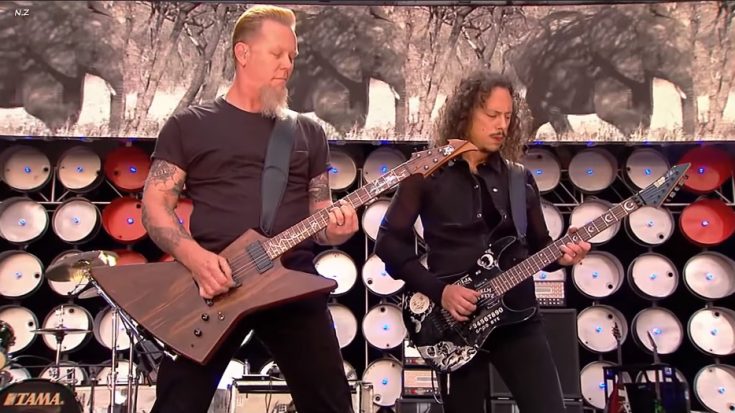 Aerosmith’s longevity in the business has guaranteed them commercial success in the music industry. Power ballads, hard-hitting classics, and even electrifying rock, the band have done and poured everything they can to preserve their legacy. So, it was quite a shocking fact that fellow legend Metallica couldn’t play a single note on an Aerosmith classic, “Train Kept a Rollin’.”

Back in 2009, the Rock and Roll Hall of Fame inducted several rock musicians including Metallica and Jeff Beck. It was a triumphant day for Metallica fans as it is the first reunion of the group since bassist Jason Newsted left. Jimmy Page, Beck, Joe Perry of Aerosmith, Flea, and Metallica were supposed to play “Train Kept A Rollin’” for a thunderous performance, but surprisingly enough, not one Metallica member knew how to play it.

Perry wrote the disastrous moment in his 2014 memoir Rocks: My Life In and Out of Aerosmith. In his own words, Perry said:

“When Metallica was inducted into the Hall of Fame, they had Jimmy Page. I think, Jeff was getting inducted to and I come up to play with Metallica. The song was ‘Train Kept a Rollin,’ and Metallica didn’t know it. They didn’t know ‘Train Kept a Rollin.’ It was like a drummer not knowing wipeouts. Jim, Ian, and Jeff kind of looked at each other like, ‘Okay, well.’ We went through the song for him and had the teleprompter. Of course, it was no pun intended, but it was a train wreck.”

Fortunately, the band had pushed through that mess and performed somewhat phenomenally with the rest of the musicians for the night. Watch how well they carried out the song below.