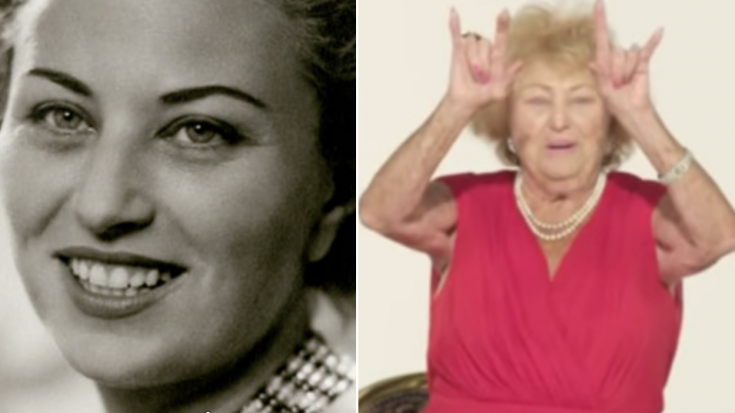 At 96, Inge Ginsberg has seen some things.

A natural born musician who studied music from age 6 to 16, the woman now affectionately known as “Death Metal Grandma” lived through the horror of the Holocaust, escaping to Switzerland with her husband where they lived as refugees. There, Inge managed a villa in Lugano set up by the American Office of Strategic Services to spy on Nazis and coordinate partisan group operations to fight the Germans.

Life eventually brought them to the United States, weather beaten from all they’d seen and survived but determined to make the most of the lives they were lucky to escape with. Inge and Otto threw themselves into music, composing music for Nat King Cole, Doris Day, and Dean Martin, scoring notoriety with songs like “Try Again”.

Inge has long since left Hollywood behind, having grown weary of the falseness that comes with rubbing elbows and hobnobbing with movie stars. She’s still writing lyrics and poems, but it wasn’t until musician friend Pedro Da Silva perused some of her writing and noted that her lyrics sounded like something straight out of death metal that Inge actually thought to use them as songs.

She went on to form Inge & the Tritone Kings, a metal band that draws from Inge’s experiences trying to survive one of the darkest chapters of the 20th century to create some seriously heavy music. You may have seen them audition on America’s Got Talent or stumbled across a video of Inge & the Tritone Kings rocking Switzerland’s Got Talent, but if not, we’ve got you covered. Check out the reaction of one of the judges when Inge opens her mouth to sing – it’s absolutely priceless, and one that everyone can relate to!

A few years ago the band released a music video for “Laugh At Death,” and it’s actually pretty brilliant. You can check it out just below this article, and while you’re at it, be sure to check out the really neat New York Times documentary on Inge’s life that was just released; her story is incredible when told through lyrics, but when she breaks down how she got from an idyllic childhood in Vienna to being death metal’s biggest bad ass, it’s unbelievable.