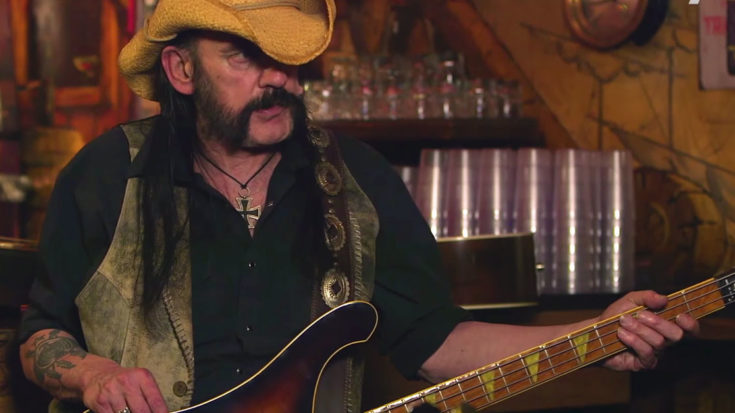 Four months before he shuffled off this mortal coil, Motörhead frontman and all around rock and roll legend Lemmy Kilmister sat down for what was to be one of his last interviews. Approached by Noisey’s Matt Sweeney while he was enjoying a drink in front of his favorite video game machine at The Rainbow, Lemmy was kind enough to head to a private room upstairs where holding his Rickenbacker, the then 69-year-old legend shared a few pearls of wisdom, ranging from his decades long love for The Beatles to how diabetes was affecting his playing.

It’s easy to remember Lemmy as this larger than life figure that was virtually indestructible as seen by his 40 year habit of Jack and Cokes and predilection for speed, but as wonderful as this final glimpse into one of rock and roll’s most loved heroes, it’s a difficult thing to see Lemmy visibly slowing down.

Fun Fact: Lemmy was strictly a Coca-Cola man, as drummer Mikkey Dee found out the hard way when he replaced Lemmy’s usual Cokes with Coke Zero and Diet Coke several years ago.

It takes him longer to catch his breath in between sentences, his movements are slower, and he openly admits that with the effects of diabetes, handling his bass guitar is neither comfortable or pleasing to his own ears anymore. Yet, through it all he maintains that killer sense of humor, cracking jokes that left interviewer Matt Sweeney laughing and Lemmy smiling coyly in between sips of his screwdriver. We’ve never missed Lemmy more than seeing him in a place he loved, and in true Lemmy Kilmister fashion, one of his last video interviews proves to be one to remember.