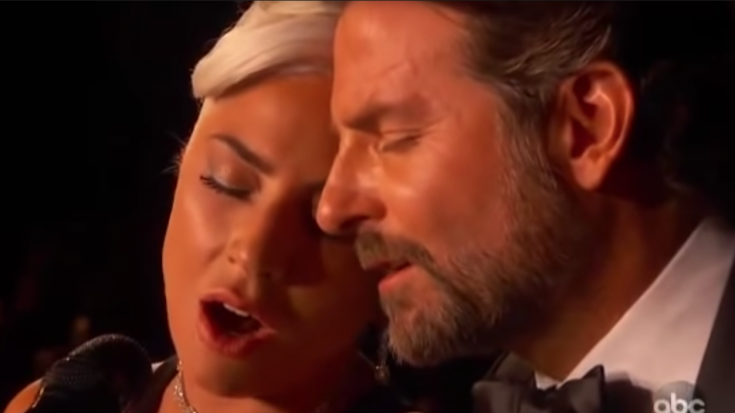 Gaga, Cooper Join Forces For Tender Duet Of ‘A Star Is Born’ Hit

Holy smokes – what a night!

Last night’s Oscars promised glitz, glam, stunning upsets and performances for the ages and didn’t disappoint, giving fans one of the most memorable, highly anticipated moments of the night when A Star Is Born stars Lady Gaga and Bradley Cooper hit the stage for a duet so stunning, we’re still fighting off the chills the next morning!

We just wanted to take another look at them. Click the link in our bio to see Bradley Cooper and Lady Gaga perform “Shallow” at the #Oscars.⁣ Photograph by Rob Latour

The audience was stunned into silence as Gaga (real name Stephanie Germanotta) 32, and Cooper, 44, crooned their way through the film’s smash hit “Shallow,” avoiding the flash and drama that usually goes hand in hand with Oscar night in favor of the quiet grace that comes with knowing that what you’ve done will stand the test of time. They kick things off as only they can – walking up from their seats in the audience hand in hand, decked out in their Oscar finest before taking their places directly across from each other onstage as the crowd looked on, unable to say a word about what was to come.

Finally, Cooper and Lady Gaga ease into “Shallow,” two distinct vocal styles coming together to create a version of the song that we didn’t know we wanted until it was finally ours.

Judging by the reaction of folks on social media just after the performance wrapped, we’re not the only ones impressed by the quiet power and strength of Lady Gaga and Bradley Cooper’s duet. Fans hailed it as “the highlight of the show,” celebrating the pair’s ability to translate the onscreen chemistry seen in A Star Is Born into something so thick, you could cut it with a knife.

Of course, nothing is perfect.

Gaga and Cooper’s performance was marred by speculation that the chemistry we saw onstage last night wasn’t just real, but something deeply threatening to Cooper’s girlfriend, model Irina Shayk, who watched from the front row next to his mother.

The speculation comes hot on the heels of news that Gaga and her fiancee of two years, Christian Carino, ended their engagement – but judging by Ms. Shayk’s excitement for not just her partner but Lady Gaga, there’s absolutely nothing to worry about!

If last night’s duet at the Oscars isn’t proof that dreams really do come true, I don’t know what is! Relive the magic in the video below and while you’re at it, don’t forget to sound off and let us know how you liked it!