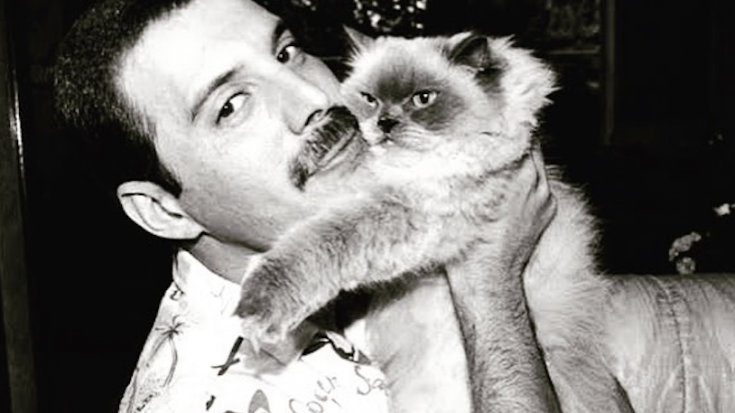 “I Think I’d Rather Have A Cat”

Freddie Mercury’s love for cats started in the 1970s when his then girlfriend, Mary Austin, bought a pair of cats for the couples home. Their names were “Tom” and “Jerry.” Mercury’s personal assistant has stated,

“Mary would hold Tom and Jerry in turn up to the receiver to listen to Freddie talking. This continued throughout the years with succeeding feline occupants of his houses.”

Among the 10 cats that lived with Freddie Mercury were Tiffany, Dorothy, Delilah, Lily, Miko, Oscar, and Romeo. Each cat would get their own stocking at Christmas too! Mercury’s boyfriend of 7 years, Jim Hutton, has shared:

“He would constantly fuss over them, and if any of them came to any harm when Freddie was away, heaven help us. During the day the cats had the run of the house and grounds, and at night one of us would round them up and bring them inside.”

Mercury also dedicated music to his cats.  The 1985 album, Mr. Bad Guy, was for them! He had stated,

“to my cat Jerry—also Tom, Oscar, and Tiffany, and all the cat lovers across the universe—screw everybody else!”

Freddie Mercury did have a cat that was spoiled a bit more than the other, Delilah. He had written “Delilah” :

“You make me smile when I’m just about to cry / You bring me hope, you make me laugh—and I like it / You get away with murder, so innocent / But when you throw a moody you’re all claws and you bite / That’s alright!”

The song was on the 1991 Innuendo album, which also included more idolizations devoted to his love for cats. Mercury also wore a cat vest for the music video “These Are The Days of Our Lives.”

During the recording of the album Innuendo, Freddie’s bandmates patiently  produced cat like sounds with their instruments. Drummer, Roger Taylor remembers, “I hate ‘Delilah.’ That’s just not me,” regarding the track dedicated to Freddie’s favorite cat.

Guitarist Brian May had told Guitar World magazine about using a ‘talk-box’ effect on his guitar to make cat noises on his instrument: “Well, I suppose there’s no other way I can make ‘meow’ noises.”

Among his final interviews is a sit-down with journalist David Wigg- in which he stated:

“I’m leaving it all to Mary and the cats.”

Rolling Stone Magazine had published, “Mercury spent hours with watercolors trying to paint a portrait of the tortoiseshell Delilah—and when he was dying in 1991, one of his final actions was stroking her fur.”

Jim Hutton included in his memoir, Mercury and Me:

“He would constantly fuss over them, and if any of them came to any harm when Freddie was away, heaven help us. During the day the cats had the run of the house and grounds, and at night one of us would round them up and bring them inside.”

He also recalled a time when one of the cats, Goliath, had been lost. After Freddie became quite upset, the entire house started searching for the cat. Upon finding Goliath, Hutton said:

“Freddie was over the moon. . . . For five minutes or more he pored his attention on the kitten, cuddling and stroking him. Then, like a mother, Freddie scolded the cat, shouting and screaming at tiny Goliath for leaving Garden Lodge. The dark ball of fur just sat there, listening calmly to Freddie’s outburst and purring loudly.”

When Freddie Mercury was often asked if he would ever had children or when he planned on having children, he would usually respond

He certainly treated his cats just like children. The official director of the Official Queen Fan Club, Jacky Smith, has gone on record saying, “They did get ordinary cat food at times, but mostly it was fresh chicken and fish prepared for them.”