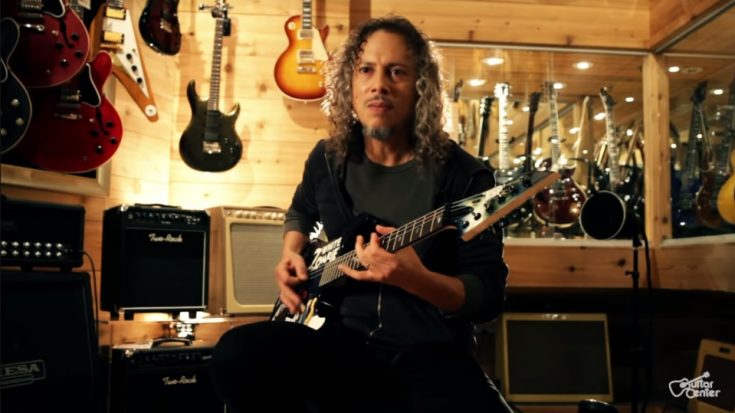 American heavy metal band Metallica is on the road for their WorldWired Tour. The band began their extensive tour since the 26 of October, 2016, and will end on early November of 2019. With venues ranging from North America, Europe, and even Asia, making it one of their longest running and exhaustive tours to date.

Now, the band is on the 13th leg of shows, back in Europe. On the May 8th show, the band played in Milan, Italy. However, something happened in the midst of the guitar-shredding solo of their song “Moth Into Flame“. Lead guitarist Kirk Hammett was in the middle of a face-melting solo, when he suddenly slipped and fell on his back.

The venue was experiencing a generous amount of rain, drenching the fans and the band onstage. In the middle of the electric solo, Hammett was frequently toggling his wah-wah pedal, which was also visibly wet from the downpour. Upon several toggles, Hammett slipped when he propped his weight on the pedal, laying flat on his back, his guitar protected. Hammett saw humor in the moment and laughed while standing up again,and continued on with the song.

He posted the captured video on his Instagram account with the following caption and hashtags, “Ummm- I slipped on my wet wah pedal. 💀 🌧 It rained so much I felt like I was playing guitar in the shower -(thanks @brettmurrayphotography for the video) #slipperywhenwet #wahwahwah #metallicafamily#Metinmilan @metallica”.

In another post, he thanked Milan despite of the weather and the earlier mishap. “When it rains it pours⁣. Thank You Milan!⁣” Hammett said.

Metallica will be continuing with the tour, with their next show to be on the 10th of May, in Zurich, Switzerland.