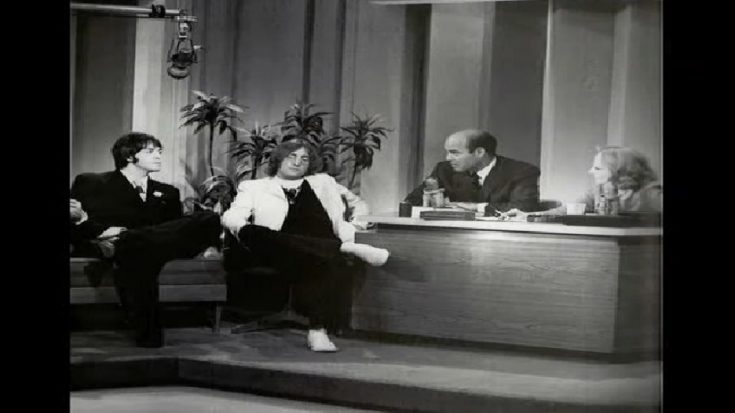 The Beatles were among the few superior bands that can say anything about everything – even with their own experiences. Take a listen as songwriting legends John Lennon and Paul McCartney talked about their encounter with Maharishi Mahesh Yogi in an interview with The Tonight Show with Johnny Carson back in 1968.

In unfortunate timing, there are no longer any copies of Johnny Carson’s early seasons of The Tonight Show in the archives at NBC. Therefore, to see Carson’s earliest interviews, you have to rely on bootlegs provided by fans who back before the days of home VCRs. Luckily, fans have gathered this 1968 interview with pictures, short videos, and even audio recordings that they could find for this matter. It was a significant period as well; The Beatles had recently returned from practicing meditation in India and were in the process of announcing the formation of their new company, Apple Corps. Upon their return to England, they planned to immediately begin recording sessions for their upcoming album, The White album.

Carson was absent from the interview and was replaced by guest host Joe Garagiola and Tellulah Bankhead. The interview was spent with silly jokes, hilarious stories about the Beatles’ previous interview earlier from another channel, and even Paul’s experience of him not being recognized by people when he was walking in the Central Park.

Later on, the discussion moved on to The Beatles’ highly-publicized trip to India with a well-known guru, Maharishi Mahesh Yogi. John was the one who first opened that it was a “mistake going there.”

“We believe in meditation,” Lennon said. “But not the Maharishi and his scene. But that’s a personal mistake we made in public.”

“I think it’s just that we’re seeing him a bit more in perspective, you know.” Lennon further added. “Cuz we’re as naive as the next person about a lot of things.”

“We get carried away with things like that, though,” Paul added. “I mean, we thought he was… uhh… magic, you know– just floating around and everything. Flying.”

They talked about what they have felt and witnessed during their stay in India, which should not be taken lightly as they have the right to say those things that they’ve experienced. But while the Lennon, McCartney, and even Ringo Starr have dropped their Indian spirituality right on-the-spot George Harrison remained close to it, and even remained truthful to his faith until his death.