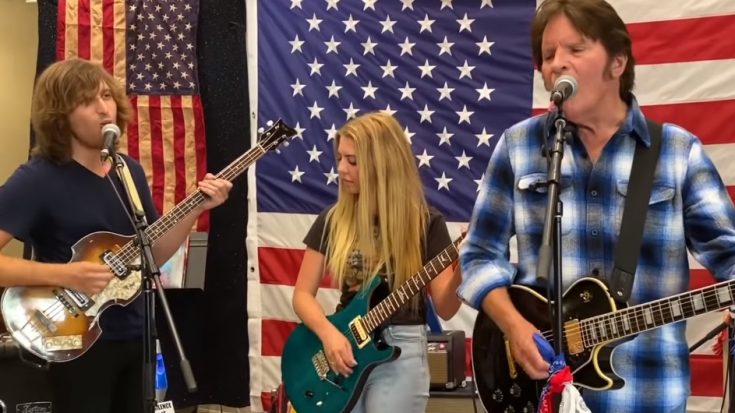 “Proud Mary” was the lead single of the band’s sophomore release, Bayou Country, and reached the second spot on the US Billboard Hot 100 while netting sales of more than two million copies in the country alone.

In an interview with American Songwriter, Fogerty said, “Sometimes I’ll think about that moment when songwriting truly started for me. It was with “Proud Mary.” I especially remember writing “Proud Mary” because I had never done it before. I had written songs, but they were always kind of ordinary. I was used to that, starting as about an eight-year old.  I’d go, “Hey! I made a song!” But I’d always know it was not very good.”

“Time went on and even as a teenager I got a little better but I always knew it didn’t measure up to people like Lennon & McCartney or Leiber & Stoller or Irving Berlin or Harold Arlen. Some of the wonderful songs throughout history. And you realize it, but you’re just a kid! I was learning. Like a young athlete,” he continued.

“Until that wonderful afternoon when “Proud Mary” happened. And I was just blown way. I was in shock, really. I thought, “Oh my God, this is really good!” He added, “I was really taking aback by it, because I hadn’t done that yet and I not enough time had passed for me even to absorb that yet. And then for quite a little streak there, for several years, I wrote several songs.”

“I’m saying this with all humility. Please don’t think I’m trying to brag.  It’s such a remarkable way to feel, that this just came out of me. It’s kind of daunting. You’re kind of scared. You work on the song till you get it right, whatever you have to do. And then you take a big sigh of relief at the end, and exhale. And you think, “Oh my God, this is really good.”

“And, of course, you play it for yourself again, and it’s a great moment.  It was such a new thing for me, and it all started with “Proud Mary”.”