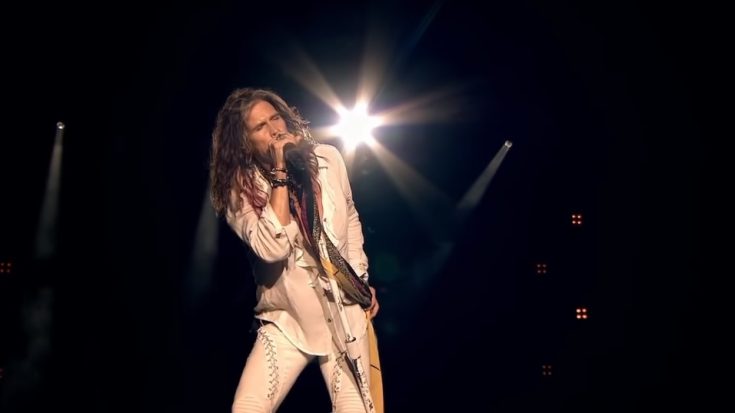 Aptly dubbed the “Bad Boys from Boston“, Aerosmith embraced the rock n’ roll lifestyle with much gusto in their prime years. Steven Tyler’s absurd claim of blowing almost $20 million dollars in drugs might be a stretch, but he and Joe Perry weren’t named the Toxic Twins for nothing. Not to single out them from the other boys, but these two were the most notorious with their relationship with drugs, sex, and crazy antics. Here are some Aerosmith stories that aren’t disclosed during Christmas family huddles.

It isn’t a hidden fact for a rock band this big to be tied with lots of groupies and their lavish shag sessions, but sheer daredevil antics made the boys share several women over the course of some orgies. All was well, until one day, Tyler and Perry found out everybody had contracted an STD. “I remember one night on the road when Joe and I were sharing a bed with two girls and woke up in the morning with a seafood blue plate special,” Tyler humorously recounts in his book, Does The Noise Inside My Head Bother You?  “Crabs for everybody!”

One Roadie’s Job was to keep the coke stash full

Talk about a niche career. A roadie was exclusively hired to secure the band’s onstage fix, when the then-youngsters didn’t have the word “later” in their vocab. “Joe had vials of coke with straws in them at the back of the stage, and when the lights would go out he’d go over there like he was checking something or making a guitar change and [a roadie] would put the straw in his nose; he’d take a hit, then the lights would come on again,” Tyler said in another account in his memoir.

Not everybody approved of Aerosmith’s crazy reputation back in the day. People were bound to get pissed, and crew members weren’t an exception. As payback for the stress Aerosmith bestowed upon them, they would regularly go potty and proceed to wipe their behinds with bologna from the catering section of the band. Aerosmith would consume these as if nothing ever happened to them. Tyler only found out years later through a confession from a crew member, “I found out years later that when the techs would get pissed off at the band, they’d wipe their ass with the bologna and put back on the deli tray.”

Aerosmith didn’t care much for loyalty back in the day, as given by their reputation with groupies. However, they still didn’t want to break off from their wives. To lay off suspicions, the band members set up a rule: No sleeping with groupies 10 days before going home to the missus. “You didn’t have sex for 10 days at the end of tour, but that was so you’d be sure to go home with a full cup of chowder. If you didn’t, you were definitely suspect,” Tyler confirms.

Escaping the Law…Under its nose

Aerosmith has had multiple run-ins with the police, but a certain encounter almost landed them serious time behind bars. The band was pulled over by authorities, and after spotting a marijuana seed in the van, proceeded to cuff them and take them to the precinct. What the police didn’t know is they carried a load full of pot in their pockets. Tom Hamilton recalls the event vividly.

“There was a room right adjacent to where we were handcuffed and there was an empty room, lights were off. Steven said ‘Gimme the pot, Gimme the pot,’ and he just chucked two bags of pot into this room. Then we waited a while. Then a detective or somebody came down, flicked the lights on and said ‘Okay, time to fingerprint you guys.’ So, we all went in one by one to get finger printed and everybody could see where the pot was, but the police didn’t.”