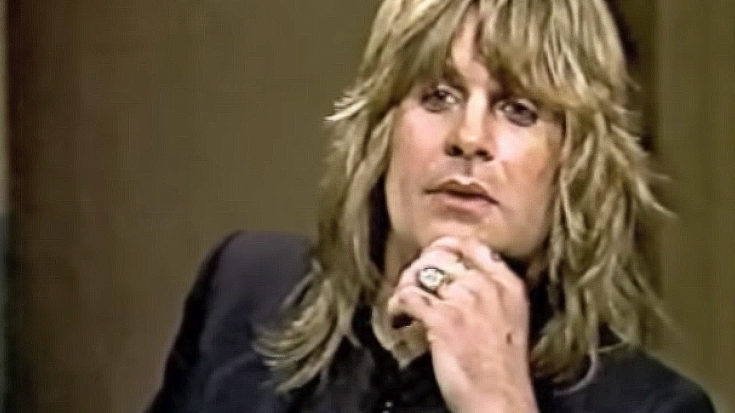 On March 19th, 1982 Ozzy Osbourne’s entire world crumbled as his guitarist Randy Rhoads was killed in a plane crash, along with seamstress Rachel Youngblood. Where others would have hidden away to begin the painful grieving process away from the public eye, Ozzy emerged less than a week after Randy’s death for his first television appearance since the crash – a guest appearance on The David Letterman Show, scheduled weeks beforehand and a surprise to fans who surely thought Ozzy would have canceled.

He appeared in a dark suit, ready with his usual wry sense of humor and for nearly 15 minutes chatted with Letterman about everything from the infamous bat incident to his first job (“My first musical job was working in a car horn factory,”); it wasn’t until about halfway in that David dared to broach the subject of the plane crash just a week earlier, Ozzy understandably reluctant to say anything about the tragedy he’d just experienced other than this:

“All I can say is that in the last week I’ve lost two of the greatest people in my life. But it ain’t gonna stop me cause I’m for rock and roll, and rock and roll is for the people, and I love people – and that’s what I’m about.”

I’ve seen this footage a thousand times and while emotionally I can’t understand the almost preternatural calm Ozzy gives off during the interview, logically it’s understandable: he’s still in shock. Survival mode is the name of the game when you’ve gone through a tragedy of that magnitude and it looks and sounds as if the weight of the past week hasn’t yet settled onto Ozzy’s shoulders, allowing him to push through the first few days and weeks for the sake of his band, crew, and Randy’s family. I don’t know how he did it, but man…he carried himself beautifully.