10 Songs That Made These Rockstars Go Mainstream 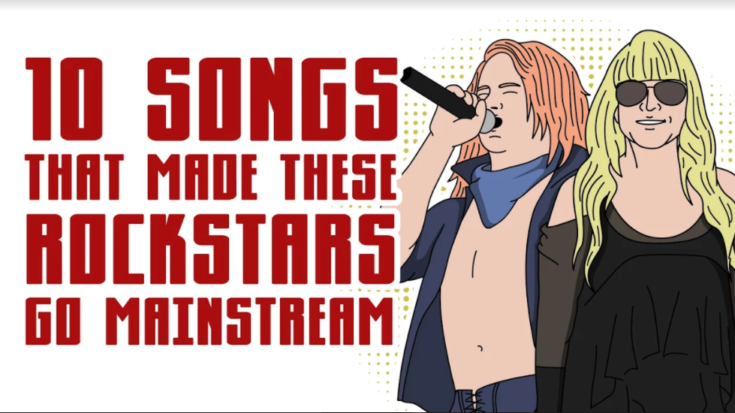 The Songs That Started It All

There are two things about mainstream success – it’s not as easy as others make it sound AND it’s risky. Why the risk? You see, not everyone breaks into mainstream from the get-go (there are bands fortunate enough to achieve that with their debut single or album while others aren’t so lucky) and some musicians want to stay true to their roots, not lose their identity and change their sound even if that means never getting the recognition they truly deserve.

But, that’s for another list. For this one, we picked out 10 legendary songs which propelled the following rock acts to super-stardom. In some cases, it took one tune to secure their spot in the rock ‘n roll pantheon. And they’re most likely still enjoying the fruits of that success today.

Let’s check it out.

Although their first two albums earned double platinum (eponymous debut) and triple platinum (“Get Your Wings”) status, it wasn’t until “Toys in the Attic” was released when they broke into the mainstream especially with the single “Sweet Emotion.”

Ironically, Steven Tyler wrote this track out of his frustration with the band and Joe Perry’s wife. That pretty much explains Tyler’s ‘angry’ tone.

“Our first two albums were basically comprised of songs we’d been playing for years live in the clubs. With Toys, we started from scratch. Making this record, we learned to be recording artists and write songs on a deadline. In the process, we began to see just what Aerosmith could accomplish. With everyone throwing in ideas, Toys was our breakthrough.” – Joe Perry

It’s probably still up for debate but most people consider “Sweet Emotion” as Aerosmith’s signature song (we’re in total agreement with this by the way) even if others believe that title belongs to “Walk this Way” or “Dream On.”

With Syd Barrett fronting the band, they may have only minimal mainstream popularity but they were already making a name in the underground music scene in London. But it was with Pink Floyd’s eighth album “The Dark Side of the Moon” when they finally achieved massive success – charting for 741 weeks and total sales of 41 million copies.

From the same album, “Money” was the band’s first hit in the United States. Some listeners thought the song was about in praise of money but it’s actually not.

“Money interested me enormously. I remember thinking, ‘Well, this is it and I have to decide whether I’m really a socialist or not.’ I’m still keen on a general welfare society, but I became a capitalist. You have to accept it. I remember coveting a Bentley like crazy. The only way to get something like that was through rock or the football pools. I very much wanted all that material stuff.” – Roger Waters

Aside from its commercial success, it also received widespread critical acclaim especially with David Gilmour’s guitar solo. The Rolling Stone magazine ranked it at #69 in their list of “The 100 Greatest Guitar Songs of All Time.”

Although Metallica’s third album “Master of Puppets” is often hailed as one of the most influential albums in thrash metal, it’s with their self-titled fifth album that broke them into mainstream. “Metallica” sold more than 16 million copies in the United States alone and it achieved 16x platinum status from the RIAA.

“Enter Sandman” was one of Metallica’s finest musical moments. It was critically acclaimed and enjoyed heavy radio airplay.

“A lot of people can probably hum this one note perfect, but aside from the fact that it’s an insanely popular song I think the solo is amazing in its own right. It fits in perfectly and adds a different dimension to the music.” – Kirk Hammett

Perhaps part of its success is because of its accompanying music video which even bagged an award during the 1992 MTV VMAs. Also, it appealed to a wider audience, thus allowing Metallica to cement their superstar status.

There were several lineup changes over the years but Fleetwood Mac hit the jackpot with the addition of Lindsey Buckingham and Stevie Nicks. And although “Rumours” was way better in terms of sales, their eponymous album helped them break into mainstream especially with Stevie’s epic masterpiece “Rhiannon.”

“I wrote this song and made her into what I thought was an old Welsh witch. It’s just about a very mystical woman that finds it very, very hard to be tied down in any kind of way.” – Stevie Nicks

It’s one of those songs you better listen to live because with every performance, it’s always dramatic and theatrical. Stevie knows a thing or two about weaving magic upon her audience. You’re left stunned, mesmerized and in awe.
Thanks to “Rhiannon,” we will always remember Stevie as the witchy godmother with her elaborate shawls and overall mystical look – she’s always been a trend-setter.

The Rolling Stone magazine called her “one of the most surprising success stories of the 1980s.” And we couldn’t agree more. She used to be a member of The Runaways and opened for several legendary musicians like Tom Petty and The Heartbreakers, Van Halen and Cheap Trick.

She even tried pursuing a solo career before forming another group, The Blackhearts. She went from not landing a deal with her solo album to having her cover version of “I Love Rock ‘n Roll” top the U.S. Billboard Hot 100 for seven weeks!

“I think most people who love some kind of rock ‘n’ roll can relate to it. Everyone knows a song that just makes them feel amazing and want to jump up and down. I quickly realized, this song is gonna follow you, so you’re either gonna let it bother you, or you gotta make peace with it, and feel blessed that you were involved with something that touched so many people.” – Joan Jett

It was her biggest hit and while she was unable to replicate that kind of success, she at least managed to break into mainstream. One of the reasons for its appeal was her music video which received heavy airplay from MTV.

This is another success story that took us by surprise. Their debut “Bleach” received generally positive reviews from critics but it was a commercial failure. “Nevermind”, on the other hand, was Nirvana’s second album which appealed to a larger audience.

They became overnight sensations with “Smells Like Teen Spirit.” This also became a turning point for alternative rock because it began invading mainstream. From sold-out shows to heavy airplay on both radio and MTV, Nirvana were suddenly superstars.

“I was trying to write the ultimate pop song. I was basically trying to rip off the Pixies. I have to admit it. When I heard the Pixies for the first time, I connected with that band so heavily that I should have been in that band—or at least a Pixies cover band. We used their sense of dynamics, being soft and quiet and then loud and hard.” – Kurt Cobain

No one expected the song to chart, let alone be the band’s biggest hit. Nonetheless, it was a commercial and critical success and was eventually recognized as one of the greatest songs of all time.

Pearl Jam is proof that you can never please anybody. When they broke into mainstream with “Black,” there were two responses. The first one was winning more fans – a whole lot of them. The second was people accusing them of being sellouts and simply jumping on the grunge bandwagon – both of which are not even true especially because their debut album “Ten” was released almost a month before Nirvana’s “Nevermind.”

“The song is about letting go. It’s very rare for a relationship to withstand the Earth’s gravitational pull and where it’s going to take people and how they’re going to grow. I’ve heard it said that you can’t really have a true love unless it was a love unrequited. It’s a harsh one, because then your truest one is the one you can’t have forever.” – Eddie Vedder

The reason why we disagreed about calling Pearl Jam a sellout is because of their refusal to release “Black” as a single and being adamant against making a music video to promote it further. Still, it was a hit and it became one of their most popular and enduring songs.

Invading mainstream is easier said than done. People were used to hearing long conceptual compositions from Rush, being a prog-rock band and all. So when they began trading those for shorter and “softer” songs, not everyone was thrilled. And their seventh studio album “Permanent Waves” featured several tracks which were more radio-friendly.

“The Spirit of Radio” became one of their biggest hits and also partly responsible for propelling their record to break into the Top 5.

“The Spirit of Radio was actually written as a tribute to all that was good about radio, celebrating my appreciation of magical moments I’d had since childhood, of hearing ‘the right song at the right time.’” – Neil Peart

The song wasn’t something their fans have heard before. The band introduced a bit of reggae and also added other experimentations. It’s included in The Rock and Roll Hall of Fame’s 500 Songs that Shaped Rock and Roll.

They had a string of successful albums but when they released “Jump!”, David Lee Roth and Eddie Van Halen became mainstream rock darlings and household names. It was their most successful single and it gave them their first #1 hit.

It was relatively different from any of their earlier stuff since it featured a synth hook. These “new” elements and changes in their style caused a rift between Diamond Dave and Eddie.

“The first thing I did up here was ‘Jump’ and they [Roth and Templeman] didn’t like it. I said ‘take it or leave it’, I was getting sick of their ideas of what was commercial … At first [Roth’s solo EP] Crazy from the Heat was great because Roth laid off me a bit. Little did I know he was testing the waters.” – Eddie Van Halen

It may not seem like much today but when it was released, their music video was highly successful especially considering they had little budget for it. It even bagged the Best Stage Performance Video during the 1984 MTV VMAs.

They had other albums which were distributed worldwide and they even opened and co-headlined with legendary rock acts like Cheap Trick, Aerosmith, and Blue Öyster Cult. But it was with “Highway to Hell” when they began invading mainstream. The song became an instant classic and the album was their first LP to break into the Top 100 in the US.

It was also the final record that featured Bon Scott who died tragically months after its release.

“It was written about being on the bus on the road where it takes forever to get from Melbourne or Sydney to Perth across the Nullarbor Plain. When the Sun’s setting in the west and you’re driving across it, it is like a fire ball. There is nothing to do, except have a quick one off the wrist or a game of cards, so that’s where Bon came up with the lyrics.” – Brian Johnson

It topped the US Billboard Hot Mainstream Rock Tracks and the album itself is nothing short of epic. Even Eddie Van Halen admitted it was his favorite record from the band.