Have You Watch David Byrne’s Cover of David Bowie’s ‘Heroes?’ 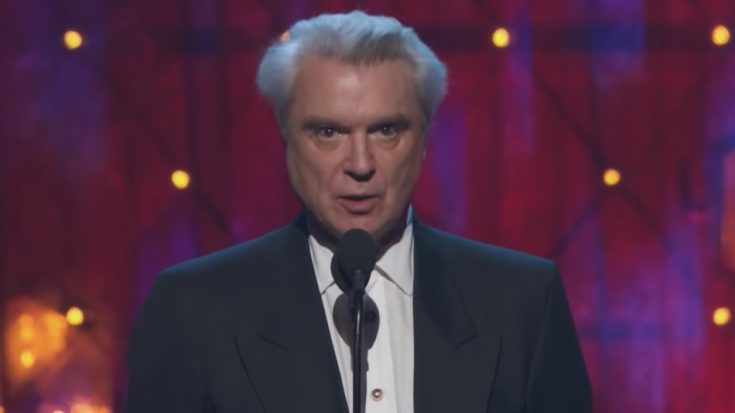 David Bowie’s music is indeed universal in its appeal to emotion, especially on Talking Heads’ David Byrne performing his own rendition of the song “Heroes” with a choir that he’s never worked with before.

Bowie’s influential reach in music and the arts doesn’t go unnoticed, especially by Byrne who was a fan himself. When he spoke of the glam-rock icon on his induction to the Rock and Roll Hall of Fame, Byrne said: “Both a shrink, a priest, a sex object and a prophet of doom, he was a kind of welcome to the brave new world, I’d like to thank him for what he did.”

He began his induction speech with: “When David Bowie came along, rock and roll needed a shot in the arm, and when I first saw him it was a shock and very familiar, it was very necessary, it was something that was needed,” talking about popular music’s anemic stand before Bowie, and was to compose itself after his time in the industry.

Byrne paid tribute to the late rocker in 2018 at the Under The Radar Festival, where he arrived as a guest to Choir! Choir! Choir!’s concert. “I’ve sat mesmerized watching online videos of the Canadian group Choir! Choir! Choir!,” he said before the show began.

He added: “They somehow manage to get hundreds of strangers to sing beautifully together… With almost no rehearsal—how do they do it? They manage to achieve lift-off—that feeling of surrender when groups sing together—when we all become part of something larger than ourselves.”

The choral group was founded by Daveed Goldman and Nobu Adilman in 2011 was an initiative that allows groups of strangers to come together and sing live.

Byrne praised the performance, saying, “There is a transcendent feeling in being subsumed and surrendering to a group. This applies to sports, military drills, dancing… and group singing. One becomes a part of something larger than oneself, and something in our makeup rewards us when that happens.

“We cling to our individuality, but we experience true ecstasy when we give it up. So, the reward experience is part of the show.”