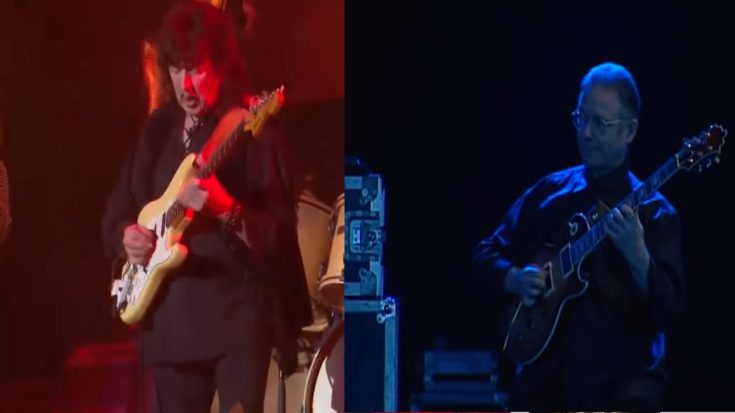 Although guitars display the most famous instrument preferred by many, playing them requires great skills of mastery and improvisation to create music. Perhaps you can practice for improvement, yet few people in this world are just born to outshine everyone; those few people include Robert Fripp and Richie Blackmore to the list.

Robert Fripp, the longest-lasting member of the King Crimson band, is a master of innovation. He pioneered the Frippertronics, a tape-delay format of sounds, and was known for developing the crosspicking technique. For his work on the King Crimson, he was influenced heavily by Avant-Garde and Classical music, the reason why he often incorporates the two in the band’s albums. Years after the group disbanded, he frequently collaborated with other singers to create music. Due to his innovative and creative ways of clean and comprehensible guitar-playing, he was often cited by various artists who idolize his way of doing things.

Relive some of his greatest guitar singles in “You Burn Me Up I’m Cigarette”, Disengage” and “Under Heavy Manners.”

On another note, Ritchie Blackmore is a man of style. While known for his wild side, Blackmore is a genius when it comes to creating riffs that suit his style, which means incorporating the insane guitar hero shapes. Like the former, he is also inclined on ideas from classical music that helped in shaping most of his works from his previous band, the Rainbow. Moreover, progressive rock down with psychedelics were the main focus for his work in Deep Purple, but Blackmore’s Night relies more on love themes. Yet compared to Fripp, Blackmore’s style was more chaotic.

Among his greatest guitar solos are “Wring that Neck”, “Lazy” and “Kill the King.”

You reap what you sow, and these artists have done their job in pouring their hearts out in the name of music. We think it is best to leave as it is on the fans to know who the greatest guitarist of all time is.