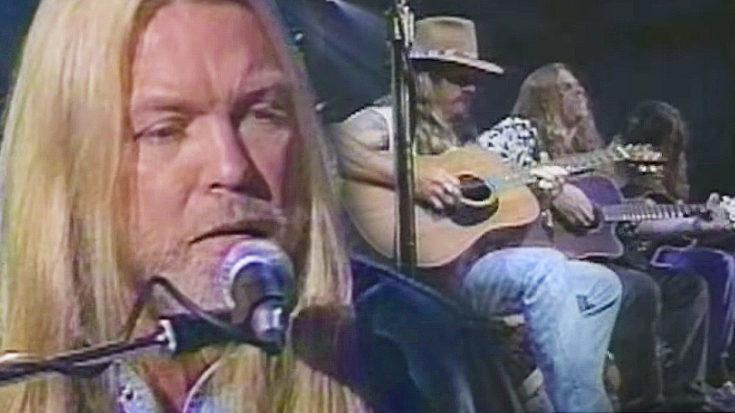 Live From The Dennis Miller Show, 1992

Gregg Allman wrote ‘Melissa’ sometime in 1967 on a songwriting marathon that yielded 1 good song out of over 200 written, and despite never cracking the U.S. Top 40 charts, it’s remained a classic rock favorite for decades. The late, great Duane Allman loved this song, often asking Gregg to “play me that song – the song about that girl,” and it’s in this 1992 performance  that you get the feeling it was really being played for Duane as much as it was for the audience that night.

A Song For Duane

Allman, supported by Dickey Betts and Warren Haynes, performs a rather sober and soulful rendition of ‘Melissa’ that Duane would have loved. In fact, with Gregg sitting so far apart from his bandmates, it’s almost like he’s recalling those nights after dinner when he’d dig out his guitar and play for Duane.

Fun Fact: This performance closed out the final episode of the Dennis Miller Show, a popular late night talk show.

Hands down, this is the most beautiful performance of ‘Melissa’ we’ve ever seen. Gregg Allman is at the top of his game, and with bandmates like Betts and Haynes who together create pure magic sharing the stage with him, the sky was absolutely the limit that night!