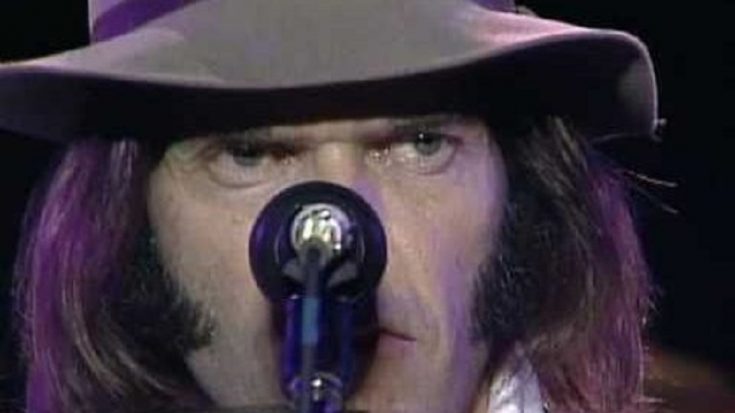 Farm Aid initially started as a blurted thought from Bob Dylan during his set at the 1985 Live Aid concert. “Wouldn’t it be great if we did something for our farmers right here in America?” At that point, musicians Willie Nelson, John Mellencamp, and Neil Young took the challenge and launched Farm Aid— a benefit concert for the farmers of America who are in dire need of assistance.

The brainchild of these rockers becomes the home to some of the finest performances in the history of music. Not to mention, it’s also a go-to benefit concert by prominent musicians in the industry such as Eddie Van Halen, Bob Dylan, Tom Petty, Joni Mitchell, Crosby, Stills, Nash & Young, and many more artists.

While we look at some of the best performances from the respective artists and how well they could rouse the crowd just like that, it’s still worth remembering this humble performance of Neil Young with his song, “Hey, Hey, My My.”

“Hey, Hey, My My” is a song written by Young and is split into two parts: hard rock and an acoustic version. It’s the one song that revitalized the singer’s career in the late 70s, who felt like he’s becoming irrelevant at this point. From then on, the song became an important part of the singer’s career, with numerous interpretations and references that came out of it. One particular reference was the line “It’s better to burn out than to fade away…” included inside Kurt Cobain’s suicide note.

You can watch Neil Young’s performance of “Hey, Hey, My My” below.