Eric Clapton Confesses Shame, Disgust Over This Part Of His Wild And Crazy Past 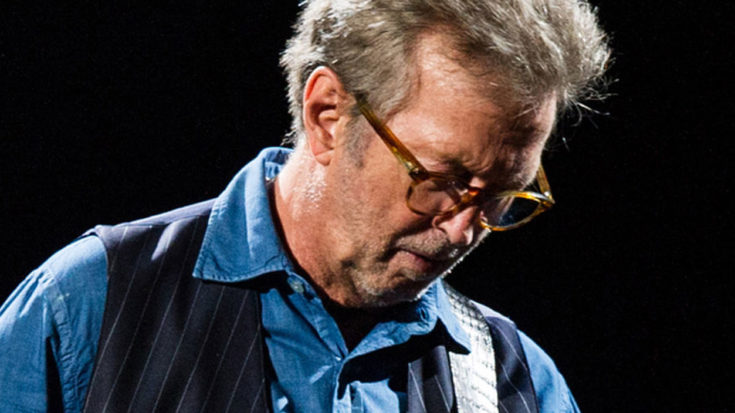 “I Was So Ashamed Of Who I Was,” Reveals Clapton

People make mistakes, this much is true. Factor in fame paired with crippling, near fatal addictions and you’ve got yourself a recipe for one of the darkest periods of Eric Clapton’s life. The 72-year-old rock legend’s long awaited biographical documentary, Eric Clapton: Life In 12 Bars was released earlier this month to great fanfare and finds filmmaker Lili Fini Zanuck exploring the turbulence, tragedy and triumph of Clapton’s life in stunning clarity, from his traumatic childhood in Surrey to the death of his son Conor.

Never afraid to stare his wild and crazy past dead in the face and take responsibility, Clapton admits that there’s one portion of Life In 12 Bars that gave him great pause, filling the 18-time Grammy winner with hot shame the more he watched. The film features footage of the 1976 concert at which Clapton went on a racist tirade; in a Q&A following the film’s premiere, Clapton confessed he was ‘disgusted’ with himself for his ‘chauvinistic’ and ‘fascistic’ comments, adding:

“I was so ashamed of who I was, a kind of semi-racist, which didn’t make sense,” Clapton reflected. “Half of my friends were black, I dated a black woman, and I championed black music.”

Clapton, now sober for over 30 years, blames his actions on the crippling addiction to drugs and alcohol that threatened to claim his career and his life. “I sabotaged everything I got involved with,” he lamented, attributing his self destructive behavior to a traumatic childhood that included growing up believing that his grandparents were his parents and his mother, his sister. When the truth came out and a teenaged Clapton went to seek out his mother, he was met with rejection as she wanted nothing to do with him.

Thankfully, Clapton’s road to redemption finds the 72-year-old miles away from both addiction and that dark day in 1976. Where many artists would have hidden behind the good times, Clapton has proven to be a master of self reflection when it comes to the wonderful, though turbulent, life he’s lived. Is it difficult to look back on and revisit through Life In 12 Bars? Of course – but there’s something important that Eric Clapton wants viewers to take from it.

“It’s difficult to sit through because it goes on so long about the difficult part of my life. I think it’s important for people to see that there is a happy ending, it’s like a redemption concept. If you are going to go and see it, be prepared for a heavy ride.”