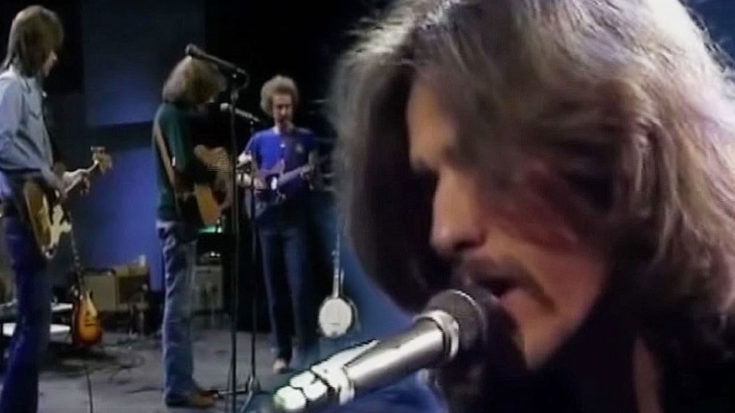 By 1973, the Eagles were well on their way to achieving the success they’d worked tirelessly for; they’d branched off into a 4-piece band featuring Don Henley, Glenn Frey, Randy Meisner and Bernie Leadon following a successful stint as Linda Ronstadt’s backing band, and their 1972 debut album Eagles was an immediate commercial success, going platinum and yielding three Top 40 singles including “Peaceful Easy Feeling”. Written in 1969 by San Diego songwriter Jack Tempchin, “Peaceful Easy Feeling” was the album’s third major single and one whose use of a near-perfect three part harmony combined with the guitar talents of Bernie Leadon resulted in a comfy spot at #22 on the Billboard Hot 100 that year.

In 1973, the Eagles took “Peaceful Easy Feeling” across the pond for a world class performance at the BBC and based on this footage alone, it’s pretty safe to say that even as far back as 1973 the Eagles were destined for greatness – not bad after only one studio album!

While Bernie Leadon would eventually exit the band in 1975 and later replaced by Joe Walsh, it’s worth noting that his guitar solo at 2:30 helped lay the foundation for the world class guitar work that the Eagles would also become known for.

Glenn Frey established himself in this performance as a phenomenal lead singer, exuding a quiet confidence that goes well with “Peaceful Easy Feeling”‘s overall theme of being fine if and when a lover leaves you and bandmates Meisner and Leadon’s two part harmony is nothing short of impressive, setting the standard for what Eagles fans could come to expect from the band in a live setting.