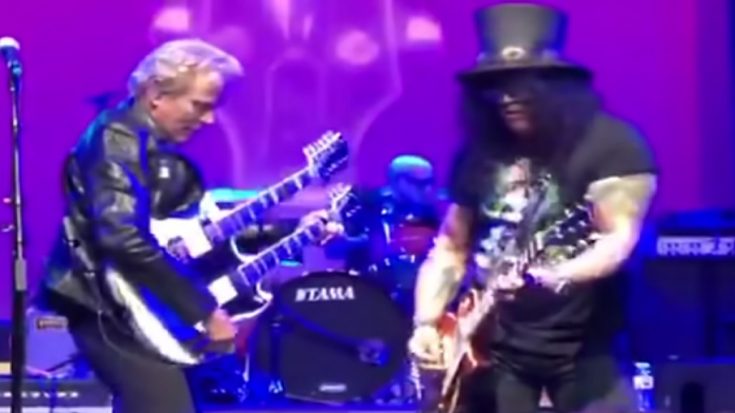 The 2020 Gibson NAMM party was a cumulation of the legendary artists to perform a series of songs and to introduce to everyone the new line of products that Gibson has to offer. It was a star-studded show that featured the rockstars that shaped the kaleidoscope of today’s music, bringing joy and celebration in the halls of Anaheim Convention Center in Southern California.

Along the famous line of artists was Eagles’ Don Felder, an avid Gibson user. Now Felder, obtaining the right time to introduce the next song on the list of his performance for the night, made the audience scream for joy as he announced that he will be performing the iconic “Hotel California” with none other than Slash from Guns N’ Roses. Given the screams from the people present, it’s obvious that it was a surprising moment for them to finally see two legends jamming on to this Eagles’ quintessential track.

Guitar hero Slash took the insane riffs to a whole new level. And Don Felder, his voice still one of the greatest, took the nostalgic feeling of the song to the audience, who also joined him in singing. There was a moment of guitar clashing from the legends, as they ended the song in great success.

Indeed, inside the margins of California, it’s a crime not to perform this magnificent track.