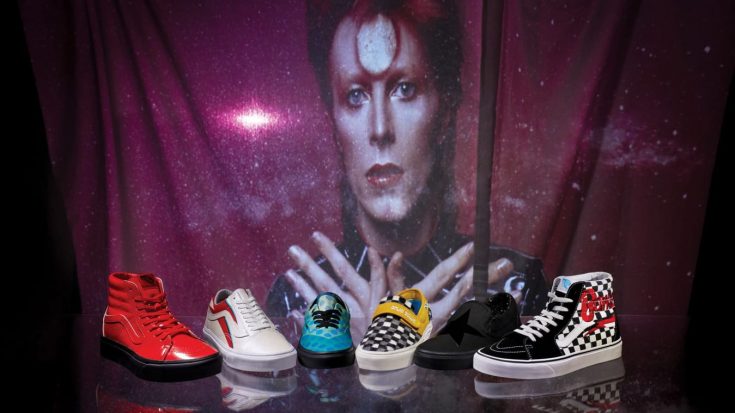 Attention Bowie fans and sneakerheads! American skateboarding apparel giant Vans has just revealed their latest artist collaboration. The brand has just dropped the curtains, and its no other than the Man Who Fell To Earth, David Bowie! They have been known for collaborations with various artists for product lines specially tailored in their styles. It was only a matter of time before Bowie inspired apparel and shoe designs, and it seems that Vans did justice to the collection. Vans dedicated a capsule collection for the late artist, paying homage to his greatest personas and the works behind them.

The designs span from Bowie’s 1969 hit single “Space Oddity“, to his final opus in 2016 Black Star. Let’s run down on the list chronologically!

The Era calls to Bowie’s hit “Space Oddity” with this piece. The polka dot design is reminiscent of the album art, along with Space Oddity printed in the heel portion.

A homage to Bowie’s signature androgynous look on Hunky Dory, it features a fuzzy exterior complete with a checkered pattern with David Bowie in the Hunky Dory font on the strap. It also features an inconspicuous Hunky Dory engraved on the outer heels as well.

Vans combined the classic checkered aesthetic with Bowie’s signature lightning streak, resulting in a hip combination that’s sure to stand out. And if it’s not enough to scream to the world you’re head over heels for Bowie, his name is displayed in large print for everyone to see.

This Old Skool variation is a more accurate representation of Aladdin Sane. Set on a ghastly, cream canvas, the design is akin to Bowie’s pallid visage in the album’s cover. The trademark lightning bolt streaks across the side, with David Bowie printed at the back in the same color and font as that of the album cover.

A Classic Slip-on variation, Blackstar is well represented with this design. A simple black-out scheme, with a glossed black star at the middle, it shows how Bowie’s work shines through even in his absence. A starry night is depicted in the inside of the sneaker, with Bowie printed in the midst of it all.

They also offer kid-sized sneakers that your toddlers can wear and enjoy. The brand has also released tees and caps that feature Bowie’s signature looks throughout the years. Grab yours now and channel your favorite Bowie persona with these items!