Indonesian President Joko Widodo Received The Most Metal Gift Ever! 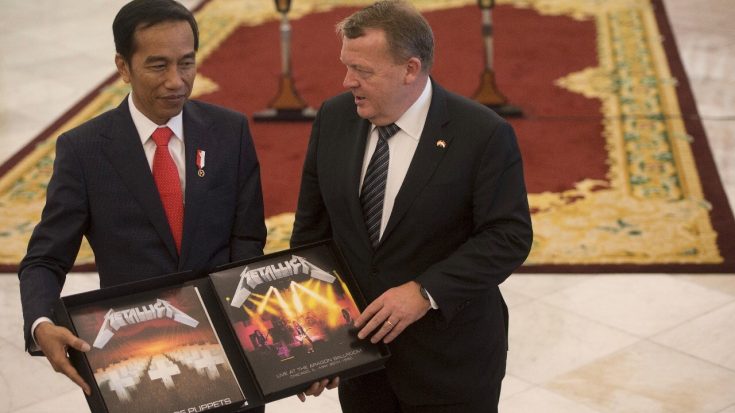 Heads of states who are also music aficionados aren’t unheard of. Often depicted as stern, and emphasized by his iron will, Indonesian President Joko Widodo has been the recent center of peculiar news. President Widodo, also known as Jokowi, has been known for being an avid heavy metal fan. When he won the presidency in 2014, it caused an initial surprise, especially to metalheads, that the newly-elected Indonesian President was part of the heavy metal crowd. Jokowi has professed his love for heavy metal bands such as Led Zeppelin, Metallica, Lamb of God, Napalm Death, among others.

On the 28th of November 2017, Denmark’s Prime Minister Lars Løkke Rasmussen visited for a bilateral meeting at the Bogor Palace of Indonesia. What surprised President Widodo was PM Rasmussen’s unorthodox gift: a limited-edition Master of Puppets album of Metallica, signed by the band’s drummer Lars Ulrich. President Jokowi, clearly pleased, returned the favor by giving PM Rasmussen a rencong, a traditional dagger from the province of Aceh.

However, Widodo reported the gift to the Indonesian Corruption Eradication Commission (KPK), in an attempt to avoid any conflict of interest. Although, by February 23, 2018, Widodo reclaimed the coveted album-gift by paying around 11 million Indonesian rupiah or roughly $800 USD, from his own pockets. “This is not about the money paid, but consistent awareness of corruption in even the smallest matter,” said a KPK representative.

This isn’t the first metal gift that Widodo has received, however. In 2013, a bass guitar signed by Metallica bassist Robert Trujillo was shown to the media by Widodo, but was confiscated later due to an inscription on the guitar that said “Giving back … Keep playing that cool, funky bass“. Anti-graft officials suspected the message was some kind of code for receiving favors in exchange for material gifts. The KPK said they were permanently confiscating the item due to the said inscription.