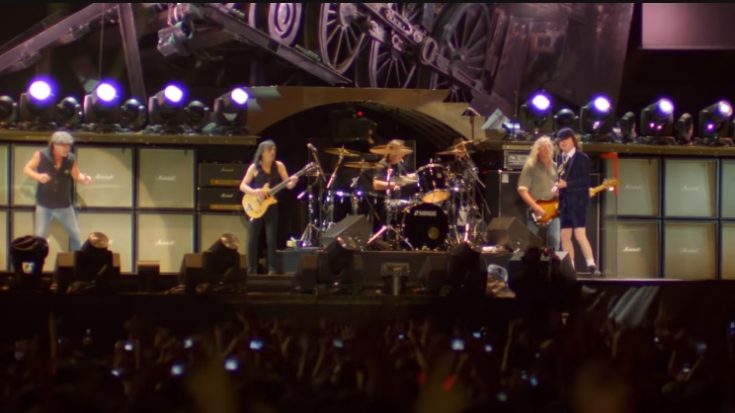 Music video by AC/DC performing Back In Black. (Live At River Plate 2009) - via AC/DC Official - Youtube

Retaining a place in the top 10 bestselling albums of all time is no easy feat, yet Back in Black by AC/DC stood the test of time. Released in 1980, the album was released shortly after their established lead vocalist Bon Scott’s untimely death. Although the album was described as a tribute to Scott, it reached unimaginable success beyond that. New to the scene, replacement vocalist Brian Johnson successfully delivered, much to the band’s delight.

Coping with the loss of Bon Scott

But before the evident success of Back in Black, AC/DC was troubled by a number of things. The recentness of Bon Scott’s death proved hard for the band. Malcom Young recalls the happening as a sudden jab,

“Bon was a little bit older than us, he probably had a few sore bones, I’m looking back on it of course, that’s just my impression. But we were down at the rehearsal room and he came down to see us and said he was just about ready to go for it, you know. He was starting to recharge his batteries. He was looking really good. So, you know, a couple of days later it was bang! It was a total shock and, obviously, it just took over everything, the whole situation.”

39 years ago, we lost one of the greatest frontman of all time #BonScott #ACDC

The situation was aggravated further when their then manager, Peter Mensch approached them with something to say. The band had just returned from Scott’s funeral in Australia, when Mensch produced a list of names to replace Scott. Infuriated, Malcom snaps, “I just couldn’t be bothered, I remember waving them away and just thinking it’s not fucking right, you know? So we waited a while and he kept pounding away, but we didn’t really have any interest in the names coming forward.”

After some time recuperating from Scott’s death, contemplating, and a blessing from Scott’s mother, the band was set out to rebuild. The band was in search for someone to fill Scott’s shoes, and went through several names until they thought of somebody who left an impression on Scott. Brian Johnson was a tour mate of Scott’s back in England, and was described by Scott to the band as someone who knew his rock and roll, primarily due to the Little Richard influence on Johnson.

Brian Johnson started out with two weeks’ worth of rehearsals with the band. During the rehearsals, people were dropping by to check on the new bloke who came to replace Scott, so far as having Ozzy Osbourne take a gander as well. Johnson wasn’t fazed, however, “Well, if I do get fired at least I can tell me mates I was in AC/DC for a couple of weeks and I’d had a nice holiday in London.”

The band then flew to Nassau, in the Bahamas, where they’d start recording. They recalled being under a storm, and had to sit out for 3 days until they could play. Their equipment was also blocked by the local customs, and had to do some bribing in order to get them back. Johnson was immediately included in the songwriting process, the band trying to welcome him to the fold. Johnson remembers the band writing the backbone of the song “You Shook Me All Night Long” one night, and some otherworldly presence washed over them. “I don’t give a fuck if people believe me or not, but something washed through me and went, it’s alright son, it’s alright. This kind of calm. I’d like to think it was Bon, but I can’t because I’m too cynical and I don’t want people getting carried away. But something happened and I just started writing the song.”

The recording session oriented Johnson of how Malcom was the head of running things around. Producer Mutt tried to alter the song because he thought it was too wordy, and showed Johnson an alternative. Upon hearing this, Malcom went ballistic and said how he killed the rock and roll in the song with his version.

Mutt was pretty critical and meticulous when it came to the vocals of the track, and Johnson frankly admitted it was driving him crazy at times. Mutt was so precise with what he wanted, even down to the breathing involved. Mutt also had a way to keep the people engaged, he recalls. He’d let nobody listen to the finished album down the road, with a dose of berating and telling how nobody would listen to it. This tough love by Mutt didn’t go unnoticed, though. The band credits him generously for the success of the album.

Johnson also recalls the hard time he got for being Scott’s replacement. People believed that there was a demo of Bon Scott singing “Back in Black” hidden somewhere, and that the band was too greedy to let it out. He was also under fire from critics who slammed his lyric work and how they never caught up to Scott’s level.

Though Scott’s death was a dark time in AC/DC’s career, they used him as inspiration to push through with Back in Black. Johnson’s induction to the band was in a way Scott’s doing as well, as he was highly esteemed by the late frontman in various discussions. Back in Black was AC/DC’s comeback with a vengeance, doing Scott proud in the process as well.