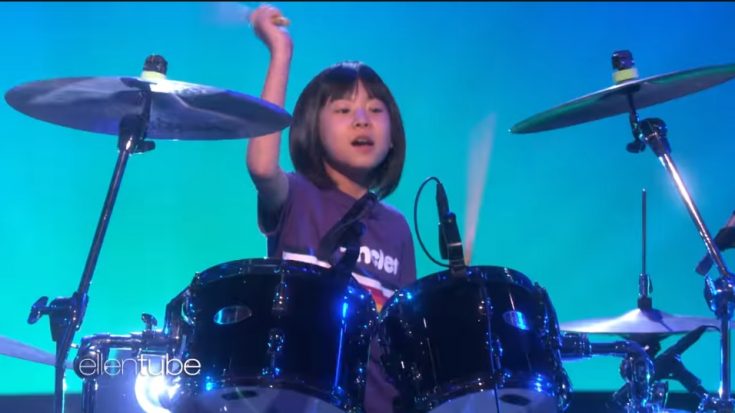 In today’s society, prodigies are popping left, right, center, and each of them progressively younger. Take Japan’s Yoyoka Soma for example: a brilliant 9 year-old drummer girl that has enthralled the world with her groove and tactical technique. Even the legendary Led Zeppelin frontman Robert Plant was impressed with Yoyoka’s undeniable skill.

Yoyoka has guested on the Ellen DeGeneres show again, due to a series of viral videos of her playing classic rock hits. She performed Foo Fighters’ hit “The Pretender“, and in the interview portion of the show, her interpreter explained how she started playing the drums at 2 years old, although comically admitting she doesn’t read music, because she’s lazy. Yoyoka talked about David Grohl as an inspiration in her playing style, pointing out his heavy groove when on the kit. Yoyoka elicited a standing ovation after her impressive performance of the Foo Fighter staple.

She was surprised by a video message by Dave Grohl himself, telling Yoyoka, “I’ve seen you play ‘The Pretender’ before and you’re amazing. So keep it up because the world needs more drummers.” Watch the whole segment below!

Grohl has been active lately, pushing the younger generation of musicians, releasing his very own multi-instrument jam and documentary, Play. The documentary tackles his story of his musical journey and his dedication to improve the craft, mainly by talking about children going into music, and their own efforts as well as they learn the ropes of the musical world within the band setting.

“Watching my kids start to play music and learn to sing or play drums, it brings me back to the time when I was their age listening to albums, learning from listening. When I take my kids to the place where they take their lessons, I see these rooms full of children that are really pushing themselves to figure this out. And even now, I’m still trying to figure it out … it’s not something that you ever truly master. You’re always chasing the next challenge, and you’re always trying to find a way to improve on what you’ve learned,” Grohl said.

The Foo Fighters have taken a break from creating new material as Grohl has some side projects to attend to at the moment, but the band is going to tour New Orleans and Sonic Temple this May, with plans of a short Europe stint in June, followed by another array of Europe dates for August. The band will also be appearing in music festivals for the third quarter of 2019.