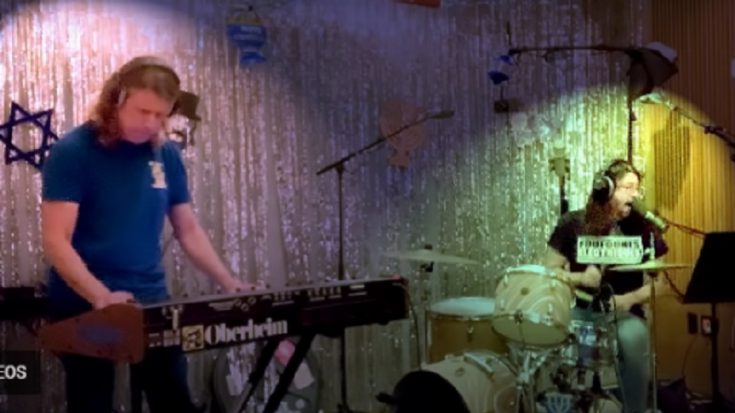 Dave Grohl and Greg Kurstin are back on the 4th Hannukah night with a lively cover of Van Halen’s “Jump.”

“Quite possibly the loudest and proudest of hard-rocking Jews, David Lee Roth has gone on record crediting his Bar Mitzvah preparation as his earliest vocal training,” says the caption accompanying the video. He became a rock star the day he became a man: Diamond Dreidel DLR and Van Halen … with ‘Jump.’”

“Jump” is the duo’s latest performance to celebrate the 2021 Festival of Lights. They have since covered the songs of Lisa Loeb’s (“Stay”), the Ramones (“Blitzkrieg Bop”), and Barry Manilow’s (“Copacabana”). In the video presented below, the two created an almost similar concept with the Van Halen original Music Video. Grohl played drums and shared vocals with Kurstin, who played the synthesizer and delivered a phenomenal keytar solo. The two goofed around but gave the viewers an intense show that borders both fun and mind-blowing.

The “Hannukah Sessions” shows the duo performing a song from a Jewish artist to mark the holiday. Last year, they’ve showcased their talents to the songs of Bob Dylan, the Velvet Underground, Beastie Boys, and the Mountain.

Watch Dave Grohl and Greg Kurstin’s performance of “Jump” below.