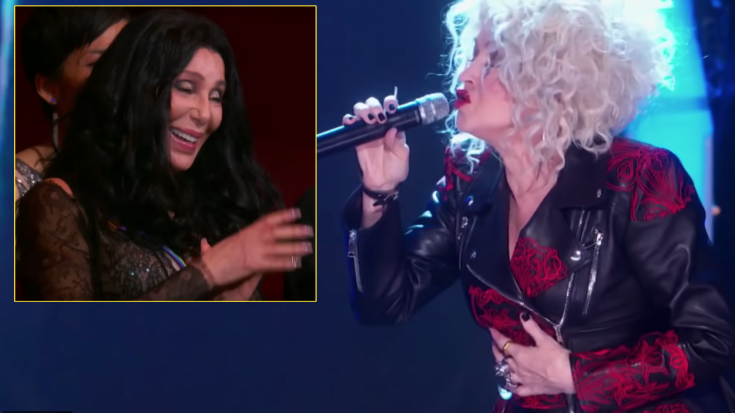 She isn’t an icon, she isn’t a legend – she’s a force of nature capable of sweeping you up in her power and creativity and with every reinvention, every reincarnation of the last 54 years of her career as one of music’s reigning queens, Cher continues to find new and exciting ways to catch us in her undertow – and the tribute put on by her longtime friend Cyndi Lauper is absolute proof.

This month saw Cher honored at the Kennedy Center Honors, recognized alongside Reba McEntire, Wayne Shorter, Broadway hit Hamilton, and Philip Glass for her musical contributions to American culture over the past several decades.

One of many performers to take the stage in Cher’s honor that night, 80’s icon Cyndi Lauper marked the occasion with one hell of a showstopping performance that found her hitting the stage with a cover of “If I Could Turn Back Time,” surprising Cher – who thought that Cyndi would be in Los Angeles that night (“I lied,” shrugged Lauper).

Decked out in a leather jacket, leather bicycle shorts and heeled knee high boots, Cyndi danced and twirled her way across the stage, the crowd completely unable to sit still and dancing in the aisles while Cher watched from her box above the stage.

However, while that alone was worth the watch, the moment that really brought Cher’s impact on the music world home was when the camera panned around the audience, showing several generations of musicians singing and dancing in the aisles and letting themselves get caught up in the fun and magic of the moment.

After 54 years,  Cher’s music is still a force to be reckoned with and we can’t think of another artist better suited to perform it in her honor than the legendary Cyndi Lauper – check out the performance everyone’s talking about in the video below!