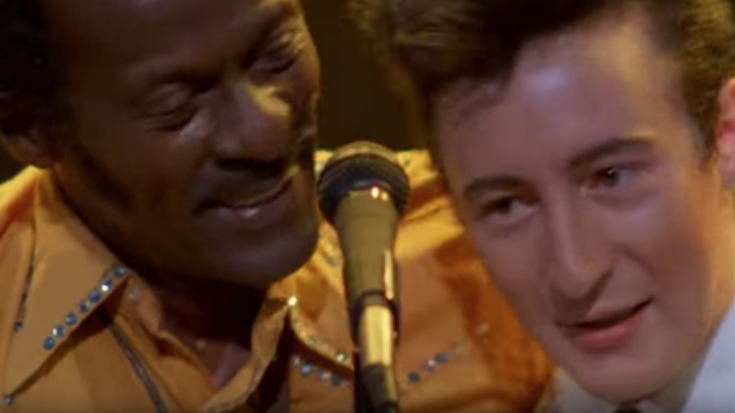 In 1972, John Lennon  labeled Chuck Berry the “my hero, the creator of Rock and Roll.” In 1986, Berry labeled John Lennon “the greatest influence in Rock music,” moments before introducing the late singer’s eldest son, Julian Lennon, to the stage. The performance was for an elated Chuck Berry at his 60th Birthday concert. Keith Richards admires the duo as he plays along with the band. The crowd feels Berry and Lennon’s adrenaline filled energy as they clap and dance along. “Ain’t he like his pa!” exclaims Berry. The rock stars jump around on stage in Berry’s signature duck walk. You can tell everyone in the theater is having the time of their life!

Once the song ends, Chuck Berry and Julian Lennon walk up to the shared mic and thank the enthusiastic crowd. Berry huddles close to Lennon for a small private moment picked up by the microphone’s audio. You can tell by the look on each other star’s faces that they are more than fellow performers or friends- they are rock royalty family. Chuck Berry and John Lennon were famously close and shared many ideologies and styles. “Tell papa hello,” says Berry. Julian Lennon confirms that he will. Then Berry says something so foreboding and bittersweet, “I’ll tell you what he says. I’ll see him. “  The message is so heart-warming and so genuine you can’t help to feel a little intrusive. None the less, you feel lucky you heard it.