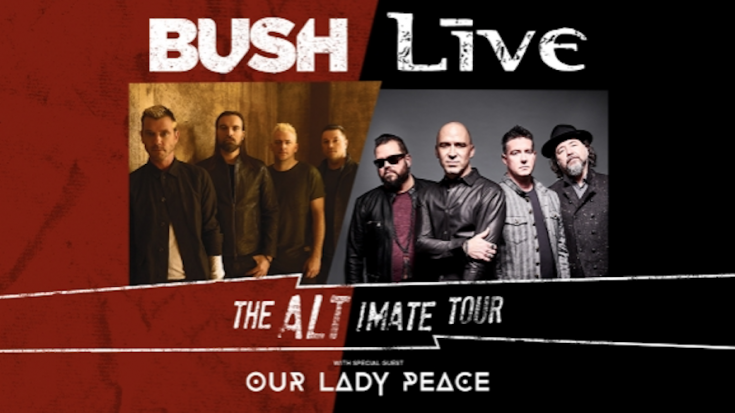 The formative and pioneering rock bands, Bush and Live, have decided to come together for one major tour. Bush’s album, Sixteen Stone (1994) and Live’s Throwing Copper (1994) will be celebrating their 25th Anniversary. Both albums helped define the rock sound of the 1990s and influenced countless bands behind them. Now, with a hardcore fan base at their foundation, Bush and Live will be introducing the music from the 25 year old albums to a new generation- much needed!

The tour will be produced by LiveNation the albums in their entirety will be performed in over 33 cities- in outdoor amphitheaters. The Alt-Imate tour will kick-off on June 6th in Mashantucket, Connecticut- moving along the entire country.

“We are thrilled to be touring this summer with LIVE. The wealth and depth of songs from both bands should provide a great night of music. Looking forward to seeing you all this summer.”

“BUSH is a great band and Gavin is a super passionate singer and performer. I’m really looking forward to spending the summer with them. I know the fans are going to get one hell of a show.”

That’s true musicianship! Bush’s Sixteen Stone sold over 10 million units when it was released- with help from the mega-hit “Glycerine.” Rossdale states, “Sixteen Stone propelled us onto the musical landscape. Those songs have found a way into the soundtrack of people’s lives and that is the highest compliment available. We’ve continued to make music that resonates with people.”

Live’s beauty of Throwing Copper also sold about 10 million copies upon it’s release. Frontman Ed Kowalczyk states,  With ‘Throwing Copper’, we were taking on big things with a big sound. Love, truth, birth, death, philosophy, religion, spirituality…we were asking the perennial questions and poking around for answers with this massive and dynamic sound. It attracted people from all over the world. We were inviting them to imagine that rock and roll could be a valid forum for exploring these types of things…we built it and they came.”

Re-live and introduce Live and Bush’s pioneering music during their 25th Anniversary! Tickets are available through LIVENATION ‘s website on March 15th at 10 AM. If you are a Citi member you can nab tickets through the same site on March 12th at 10 AM local time. Look below for the dates!