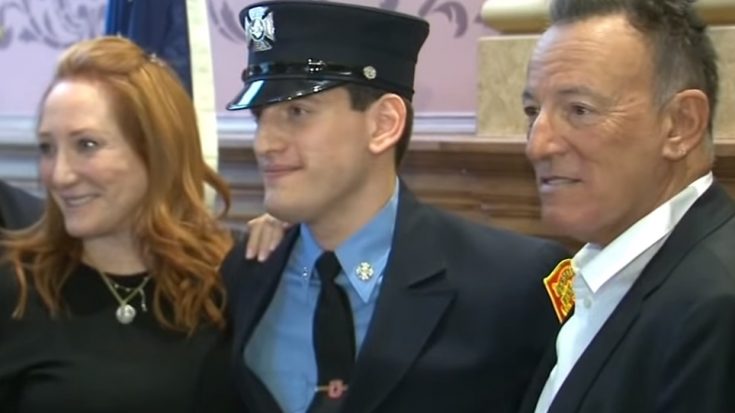 The Boss’ youngest son, Sam Springsteen, has just been welcomed into the Jersey City Fire Department.

Sam, who is 25 years old, was recently sworn in as the fire department’s newest team member. The young Springsteen graduated from the Monmouth County Fire Academy in 2014 and also previously worked for his own hometown’s Colts Neck Fire Department, the Long Branch Fire Department, and the North Wildwood Fire Department – where he did the heroic act of saving a fisherman stuck in waist-deep mud. And just last summer, Sam joined the esteemed Jersey City Fire Department as a fulfillment of his lifelong dream.

⭐️follow that dream⭐️ SO PROUD and Happy for you!! Congratulations to everyone who was there yesterday…. Thank you and stay safe!!!❤️❤️❤️❤️❤️❤️

A post shared by Patti Scialfa Springsteen (@officialrumbledoll) on Jan 15, 2020 at 2:14pm PST

His parents, Bruce Springsteen and Patty Scialfa, were present in his swearing-in ceremonies. Springsteen said that “You know I think he can handle himself really well,” when he was asked if he was concerned for his son’s safety. Scialfa dubbed Sam as their family hero in conclusion.

The rest of the Springsteen brood are successful in their own rights as well, with Evan as a SiriusXM Radio team member, and Jessica being an acclaimed showjumper who is being eyed to play in the Olympics.