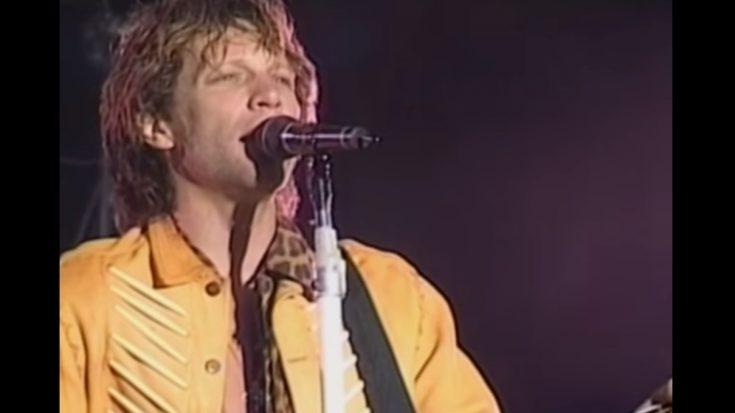 Just a little while after their success with Slippery When Wet, Bon Jovi headed back to the studio for the production of New Jersey. Being the fourth studio album of the band, Bon Jovi wanted to benefit from the momentum of Slippery When Wet and establish their name as one of the rock staples of the time. Just after a break of four weeks, Jon Bon Jovi and Richie Sambora focused their efforts into writing new material for the follow up album.

After bringing in multiple collaborators such as Desmond Child, Diane Warren, and Holly Knight, the band was able to come up with an astounding 34 tracks written. With this in hand, Bon Jovi wanted it to be a double album, but insistent negation from their record label wouldn’t make it happen. So to narrow down the list of the tracks to be included on New Jersey, the band sought advice from the best source they could ever find: the fans. Producer Bruce Fairbarn told his babysitters to come and invite all of their friends to listen to the studio demos. “They listened to everything, and we gave them all a piece of paper and a pen and told them to write it down what they thought of it and number it. And they did. It works real well. Ultimately they are the ones who got to like the record,” Jon Bon Jovi recalls.

“Bad Medicine” was borne out of the band’s tumultuous time in Japan, where Sambora recounts, “because that chorus was essentially written when we were shooting a commercial for Fuji tape in Japan, standing in water up to our knees! I was in a rocky, volatile relationship at that point, and all of a sudden this title just banged up into my head: ‘Bad Medicine.’ I walked up to Jon on the set between takes and I said it to him, and he said, ‘Yeah, hang onto that because we’re going to make that real good.’ We rewrote it and rewrote it and rewrote it, until it was really, really very good.”

“Born To Be My Baby” was meant to be a continuation of the rocker anthem “Livin’ On A Prayer”, with the heartland rock themes of everyday struggles explored even further, and the characters Tommy and Gina are revisited as well. “Lay Your Hands On Me” was the album opener of the band, which was surprisingly made on the spot after the request of a video production team and suggested something unique and energetic to open their shows.

On the ballad-side of things, “I’ll Be There For You” beautifully showcased a blues arrangement by Sambora and his complementing harmonies with Bon Jovi. Another one was “Living In Sin”, which was the only solo composition of Bon Jovi for the album, where he used his faith as a viewpoint for writing, while also reflecting his relationship with soon-to-be wife Dorthea Hurley. But one of the most powerful songs in the list, for the band at least, was “Blood On Blood”, which was as sentimental as it got on the album. “As long as those pictures are painted still, with the lyrical content and you get that feeling at the end of a son. We look to find what happens at the end? How do you feel at the end? … ‘Blood on Blood’ is something we really live by,” Sambora shared.

All in all, New Jersey was a great effort from the arena rock icons, especially since they were at an all time high with the previous record. How they managed to craft all the songs without buckling under the pressure of a reputation they were following up is remarkable enough, but the hard rock album speaks for itself just as well.