After All This Time, Gene Simmons Finally Gets Candid About President Trump… 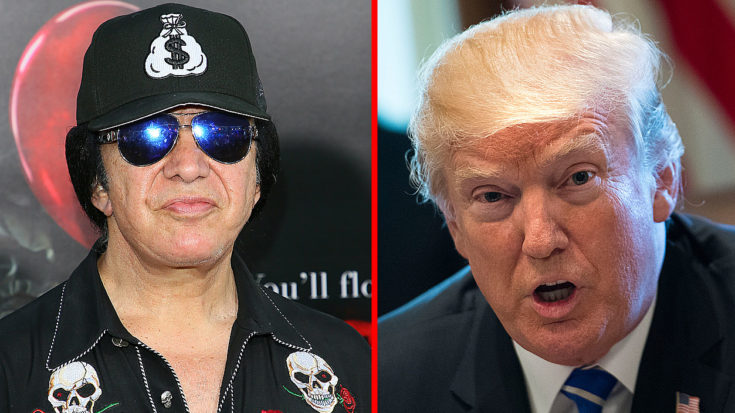 Bold Words From The Demon…

Though most people may not care to admit it, rock legend and KISS co-founder Gene Simmons truly is one of the smartest music and business minds out there. He is arguably one of the most successful musicians of his time as well as being a successful businessman, but he is also one of the most candid and outspoken people on the classic rock scene. This characteristic often earns him a lot of negative backlash. For lack of a better term, he has no filter. Which is funny considering his latest comments on President Trump.

In a recent interview with Meltdown, Gene Simmons was asked if still speaks to Donald Trump after being a contestant on The Celebrity Apprentice back in 2008. Here is what he had to say.

“Yes, I do. And the president is pretty much the same guy you see on TV or in public office. People have public personas and private personas, but I don’t think the president has a filter. I know the man well enough, and I’ve known President Clinton and President Bush, and I will say this on the president’s behalf: he’s not a politician and doesn’t really care what anybody thinks. That’s neither good nor bad. What you see is what you get — there’s no filter there.”

This past September on The Strombo Show. “Do I think he said a lot of stupid things? Oh, yeah. He says stupid things, and so do you, and so do I. I’m not validating it, but there’s not a human being that walks on the face of the planet that privately hasn’t made racist or anti-Semitic or anti-women jokes, or anti-Irish jokes. Privately, everybody does it. He is a Tourettes president who will say whatever he wants, and he doesn’t give a f*** if you approve of him, and he’s doing the job for one dollar. I like that.”

Clearly, Gene Simmons is not holding back here, but it’s still obvious that there is great mutual respect between the president and Gene.